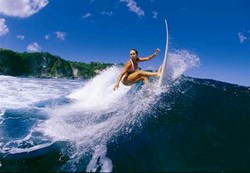 Billabong has released the official dates for the Pro Junior Series in Bali for 2008, announcing a return to the prime locations of Keramas, Kuta Reef and Canggu for the three event circuit. The inaugural 2007 series dished up some of the tastiest waves the juniors had seen in a long time and 2008 will again see a return to the same venues. The events are open to any global competitor willing to try their hand against the local Indo rippers, you just need to be aged 20 and under. While the events are not ASP sanctioned, (no ratings points) what better way to spend three months than chillaxing in Bali, chewing Nasi Goreng, sampling the local festivities and getting piped with only three other guys in the water.

Last years event winners included Julian Wilson (AUS), Heath Joske (AUS) and Madison Williams (AUS). The highest placed Indonesian surfer in the series will once again be awarded a spot into the Von Zipper Trials at the Billabong ASP World Junior Championships in Australia next January according to Global Surf News.

The events cost $45 USD to enter for International competitors and Rp. 200,000 for Indonesian surfers. The 2008 Billabong Pro Junior Series Indonesia is supported by Kustom, Von Zipper, Nixon and the ISC (Indonesian Surfing Championship).