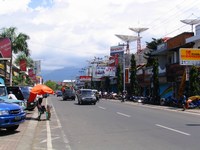 Singaraja is in the regency seat of Buleleng and is often referred to as Lion City. Located on the north coast just east of Lovina, Singaraja was once the capital of Bali under Dutch colonial administration. It is a place not renowned for people to stay overnight or for a few days and most travellers travel further along the coastline to places like Lovina where the accommodation is more prodigious and of better quality. However, it is a city of charm with its wide, tree-lined streets and Dutch colonial architecture present every where you look. Singaraja is also an educational centre having two university campuses. But, that is not all that the Lion city has to offer. Being steeped in history, Singaraja has some great places to visit as well as some really good warungs and restaurants, and, not to forget the numerous market places. A turn down any corner will reveal a surprise and the people are amongst the friendliest on the island.

Here are a few places you might want to check out next time you are up this way:

Gedong Kirtya Museum and Library: This is the only library in the world with a large collection of lontar manuscripts both ancient and sacred texts on leaves of the lontar palm. The building also houses books from the Dutch colonial era and some very interesting inscribed copper plates called prasasti. The library actually contains over a thousand texts on the sciences from philosophy to astrology and medicine. Not far from the Library is the museum which houses the collection of the last Raja of Buleleng.

Ling Gwan Kiong Chinese Temple: Just off Jalan Erlangga and a stones throw from the ocean sits the beautiful Chinese temple Ling Gwan Kiong. A colourful and beautifully constructed klenteng, access to the temple is via a water bridge over a pond filled with pink and white lotus flowers. An unusual array of Koi fish can be seen in the depths of the water of this quaint pass-over to the inner temple. Gold Bhudda statues and ornately decorated textiles are to be found everywhere. Particularly impressive are the murals of Deities hand-painted on the entrance doors and surrounding walls.

The Waterfront Harbour: This is a nice place to relax and quite stunning with its panorama of the open ocean. It is a quite place and there are some deserted and old Dutch warehouses to be found here but they are rundown but one can imagine the hive of activity that once occurred there. Take a stroll along the beach and have a look at some of the scattered traditional villages along this stretch. There is also a monument called Yudha Mandala Tama that was erected in 1987 and commemorates the independence struggle against the Dutch in the 1940’s.

Singaraja Central Market: Located right in the centre of the city on the main street, this poky and dusty market is fabulous to meander through albeit a tad claustrophobiatic at times. The market is seldom visited by westerners so be aware of pilfering but it is a place where you an also get some great shopping and cheaper than in Kuta!. It is a general goods market meaning it has just about everything.