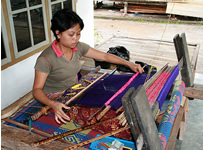 The native people of Lombok are called Sasaks and have their own language and arts. Here are some of Lombok’s unique arts.

• Oncer:
Oncer is a war dance performed by males of all ages at festivals. Popular in Central and Eastern Lombok.

• Tandak Gerok:
Tandak Gerok is a dance often performed in celebration of a harvest. An instrument called the rebab, which resembles the Arab lute is played in accompaniment, together with bamboo flutes and singers.

• Genggong:
Genggong is dance performed by 7 musicians using flutes, the rebab (lute) and other percussion instruments. Musicians dance to the music.

• Kayak Sando:
Kayak Sando is a dance from Central and Eastern Lombok with dancers performing wearing masks. This dance is a spin off from the Panji stories of ancient Java.

• Rudat:
Rudat is a dance performed in checkered black and white sarongs and black caps, by pairs of men. Musical accompaniment is provided by an instrument called a jidur, which is a type of drum, tambourines and singers.

• Gandrung:
Gandrung can be see in the towns of Praya, Lenek and Narmada. This love story dance is performed by men and women.

Cupak Gerantang:
Cupak Gerantang is a traditional dance performed to celebrate important ocassions. It is based on the Panji stories of 15th century Java.

Factors affecting the arts & crafts of Lombok include the ancestry of the population. West Bali has a large Balinese population who continue their Hindu culture, with temples such as Pura Batu Bolong. East Lombok had a migration of Bugis from Sulawesi in the 19th Century and the area around Mataram attracted Chinese and Arabs. The majority of people in Lombok are Muslim, that religion being brought from Java with its own cultural twists. Going back even further, there is some suggestion that the original inhabitants of Lombok may of come from Myanmar & India, with local Sasak clothing, featuring short-sleeve tops and long black sarongs being similar to the dress from those areas.

Textiles can be found in the villages of Sukarara, Pringgasela, Penjanggik and Cakranegara. Both ikat and songet cloths are produces are are similar to those in Bali. Lombok has special cloths such as the kain usap lempot and kombang which are used in religious ceremonies and are not for sale. The best place to buy textiles in Lombok is the Lombok Handicraft Center in Mataram.

• Pottery:
Lombok has its own pottery and the easiest place for a visitor to go is the Lombok Pottery Center in Mataram. Of course if you visit the villages where the items are made you’ll get a way better deal. The villages of Penakak near Masbagik, Penujak and Banyumulek are famous for pottery. The potters are usually females who create large pots, bowls, vases etc. The process involves using hands and crude implements to work local clay into the desired shape. The firing process involves stacking pots under a pile of wood and straw creating massive heat. Plant extract is mixed with fine clay and water to create a smooth shine when applied.

• Carving:
You may see carved boxes being sold in Lombok, which are actually from islands to the east including Sumba. Lombok villages of Sukaraja and Senanti are local carving centers.

Senggigi also is a place where souvenirs are on offer, so look out for some of the unique crafts of Lombok.