Kuta Beach is a popular surfing and tourist destination. While the area offer a good number of things to see and do in the immediate areas, there is even more just a short drive away. The areas that surround the tourist area of Kuta Beach are filled with temples, wildlife refuges, and much more. Check out some of our favorite day trips you can take from Kuta Beach. All of these things can be done in a day and give you plenty of time to make it back to your hotel in Kuta.

If you need help making plans to visit any of these places, ask your hotel staff. They should be able to offer up some advice on how to get to these popular locations.

If you have any other suggestions for day trips from Kuta Beach, please let us know by leaving a comment below! 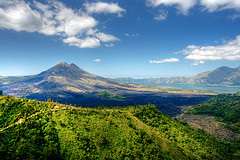 Gunung Batur is one of the most sacred mountains in Bali and probably the most popular. It is one hour drive from Kuta beach to the nearest settlement at Penelokan which is the starting point to the summit of this active volcano. The volcano is famous for its beautiful caldera, which encompasses the majestic turquoise Lake Batur, that is itself an attraction famed for canoeing.

The easiest and most well known route to the top of the mountain takes just a little more than two hours. Visitors flock to the mountain to see the astounding panorama of colors and breathtaking sunsets. Apart from early morning and evening tours, a chance to see the sunrise is increasingly becoming the main attraction. In the morning, the misty clouds hovering above the lake start their journey to the summit, providing once in a lifetime spectacle. There are numerous guides who will be ready to take a small group in any time of the day. Among its several craters, the most sought after is the middle sandy crater which provides the best views and a chance to enjoy warm lava rocks, hot springs and gluey lava flows. Plan an early morning visit to traverse farther for navigating the bat caves and a mountain temple. 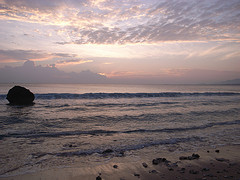 West Bali National Park is on the least inhabited and sparsely populated region of Bali. It provides an opportunity to visit a lost paradise containing numerous endangered species of which the white Bali sterling is the most famous. A mascot of Bali, only 50 such birds survive. You can visit the rehabilitation program site to watch these most colorful species in its natural habitat. There are over 160 bird species and almost 17 different mammals which include the one of its kind barking deer, giant squirrels and leopards.

Visitors have the flexibility in choosing numerous tours that operate on a daily basis. The park offer one of the most myriad sceneries in Bali with sheer cliff face and black rock surfing friendly beaches. It was here that the last of the famous Bali tigers, once prowled. The last one was shot in 1937, four years before the creation of the park. Visitors to the park are thrilled by the prospect of venturing deep into the forests, rice paddies and swamps which are rightfully highlighted in the government brochures and travel magazines. The Rambutsiwi Hindu temple and the surrounding scenery provides one of the most striking examples of remote and rugged outposts in this part of the world. Traditional villages and lakes abound in the peaceful environments away from the hustle and bustle of Kuta beach and its vicinities. 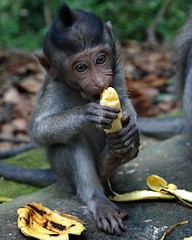 If you are adventurous by nature or just want to show off then a visit to the Sacred Monkey Forest in the middle of Ubud is an activity which takes courage, respect and an interaction with the bizarre. The heavily forested sanctuary in the middle of an otherwise crowded town distinguishes itself by revealing secrets along its well paved paths containing the three sacred Hindu temples.

Most visitors come here to see the long tailed macaques that are not afraid to steel anything and everything from the visitors. Fortunately, they will only jump at the opportunity if someone test their temperament. These hairy creatures are not so innocent as they may seem. These monkeys keep on increasing their colony from only 69 a decade ago to more than 300 strong in four different groups. The caretakers feed them regularly and such feeding time brings with it the frenzy and a sight to behold. It is not only the attraction but temples, shrouded by the thick forest cover, which hold sinister secrets apparent from the Rangda figures devouring little children along the entrance to the Temple of the dead. You might want to take pesky kids with you who will be delighted by a close encounter with the untamed. 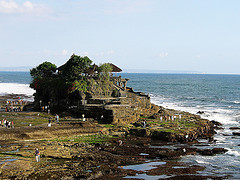 From distance, it seems like a sailing ship adrift in the sea. Just a few kilometers out of town lies this magical temple, Pura Tanah Lot, which on first glance seems to be custom made for a blockbuster movie set. Accessible only on low tide, the sacred pilgrimage site is located on a fairy tale rock formation enhanced by the beauty of twilight and the fantastic Balinese sunsets.

Numerous vendors have set up stalls by the seaside where visitors can relax and share the stories surrounding the existence of this structure which is said to be guarded by hundreds of sea snakes who take refuge at the bottom of the rock. To prevent the virgin temple, no one is allowed to enter the compounds. This said, it should not deter anyone from enjoying the beauty of the surrounding area. It is better to arrive in the early afternoon and stay until the sunset. You will be required to pay a fee to enter and pass through hundreds of souvenir stalls on either side of the narrow track. Allow plenty of time to stroll around the beach and locate a perfect spot from where to enjoy the sight and sounds of this mystical structure.