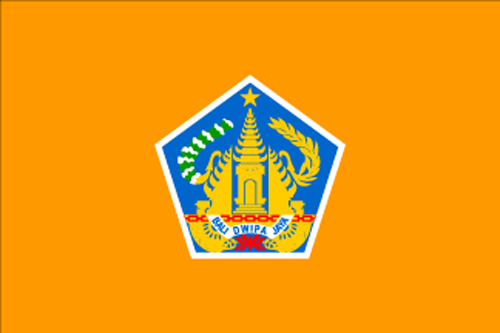 The Bali flag has a light saffron, or orange-yellow, background that has the coat of arms of the Bali province in the center. It is not a civil flag, as it may only be flown with in the Balinese governor’s office.

The Bali coat of arms is a pentagon with a blue background. It features a Barong, which is a traditional Balinese mask. In Balinese myth, the Barong is a protective, good spirit that guards villages. On the bottom, there is a lotus flower as well as two hand fans, called kipas, that are framing the flower. Around this is a temple and below is a banner with the words ‘Bali Dwipa Jaya’ which means ‘Glorious Bali Island’.

History of the Bali Flag

Little is known of the Bali flag, other than it is a provincial flag, and not a civil flag. It is only flown with in the governor’s office, inside parliament buildings, and perhaps during provincial events. It is rumored that the all Indonesian provinces have similar flags with their separate coats of arms adorning them that were designed using official government specs. While there is no law forbidding the use of the Bali flag by ordinary citizens, it is not often used by the general public.

As an Indonesian province, Bali technically flies under the red and white flag of Indonesia, which is called the Sang Saka Merah Putih (The Red and White). This flag has two horizontal bands, with red on top and white on bottom. The red symbolizes bravery while the white symbolizes the spiritual. The Indonesian flag was first flown on August 17th, 1945. The colors are adapted from a flag flown in the 13th century during the Majapahit Empire.

The flag was originally revived in Java in 1926 to protest Dutch rule, but was subsequently banned for the remainder of the Dutch occupation in Indonesia. There are unconfirmed rumors the current flag was actually created when members of the Indonesian independence movement tore the bottom blue stripe from the dutch flag, thus leaving the red and white behind. The first official red and white flag from 1945 is named the Bendera Pusaka, which means heirloom flag, and is still carefully preserved to this day.