Thoughts on a Short-Long Stroll and Other Matters 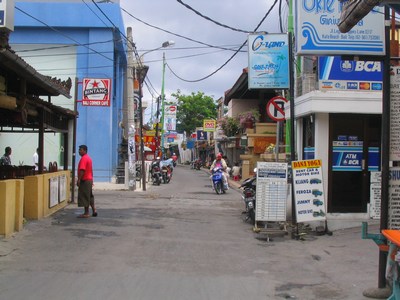 Bali is basking in glorious sunshine, the tourists relishing in the activities the island has to offer and, the beaches are fairly crowded. It makes a change from the persistent heavy showers that have I have found annoying in the last few days. Yeah I know it’s still the rainy season and I have nothing against the floods from above but it does tend to restrict one’s activities. After the thunderstorm two nights ago Poppies 2 resembled a padi field and to make matters worse, there are numerous large holes in the road making it hazardous not only for motorbikes and cars, but also for tourists who think they are paddling in the sea and end up shin-deep in a pothole. I was talking to a Balinese friend of mine about this and I mentioned the easiest solution is for the shop owners along the lane to fill the holes with a few rocks and batter them down. It would ultimately be to their advantage. I have seen it done before so many times. Made smiled at my suggestion. “They just don’t think of these things”, he replied. When I pondered on this what made said made sense. At least the shopowners along Jl Legian did the right thing with the gaping holes in the road. They merely stuck a pot plant into the abyss thus warning drivers of the peril. 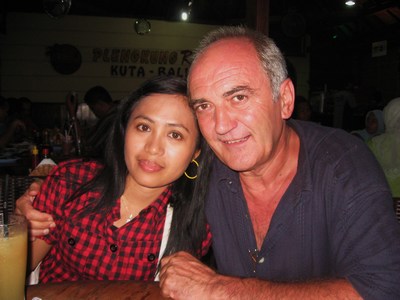 Good friends of ours, Karl and Arti, arrived at the Prawita Cottages the other day and it was great to catch up on what thy had been doing since we saw them last nine months ago. Karl who hails from Austria and Arti from Ternate have tied the knot and decided to travel through East Nusa Tenggara in a rented jeep just for the fun of it. Last night we went for dinner at Plengkung and I revelled in the stories Karl told me about travelling through Sumbawa and how once the jeep virtually ceased to move. They were stuck in the middle of nowhere! However, suddenly locals appeared and assisted them in repairing the vehicle and, refused to accept any money for their kindness. There are many others and too numerous to mention in here but, one of our conversations was about taking a short-long stroll. To the uninitiated, a short-long stroll could be anything from 5 kilometres up to 20 kilometres. The enthusiasm from our friends for one of these walks was overwhelming and so the plan was sealed. I hadn’t been to Pura Petitenget since the late 80’s and was eager to return and re-photograph the beautiful temple on the coast. “It’s not far to Tanah Lot from there” was thrown into the conversation, and voila, a short-long stroll was born. So, tomorrow morning at 5am we start walking along the beach from Seminyak to Pura Petitenget and then onto Tanah Lot. Should be interesting and I will have the fotos during the week of our venture.

Last night after dinner, Karl, Arti and Candika decided to devour a couple of Durian. The balcony of our place at the Prawita Cottages was somewhat a bit on the nose after the fruit was sliced open. As the odours wafted in the light breeze through the place it was no wonder I didn’t see any other people around. Not being a great lover of Durian fruit I made my self absent from the feast. For those of you who know Durian fruit you can understand that it is an acquired taste. Easy dinner tonight at Dapur Alam on Jl Patih Melantik but, no doubt it will be another feast.