The Roads to Kintamani 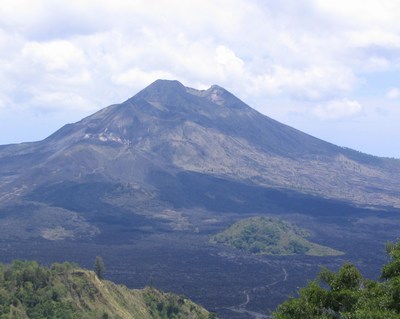 Everyone that has visited Bali has, at one time or another, travelled up the mountains to Kintamani. The area there affords some spectacular views of Gunung Batur and Danau Batur and, on a good clear day the Bali Aga village of Trunyan can be seen. It is an area of late that has received some bad press and rightly so and the hawkers can be rather annoying and pushy. It appears, however, that things might be on the better for the Kintamani region. There are four major routes you can take to get to Kintamani and each road has its own surprises and great places to visit along the way. These might be temples or other place of worship, museums, and towns that are renowned for their specialty in arts or crafts. Once in Kintamani you have a choice of restaurants with a high price tag if you fancy a feed whilst enjoying the view. My best advice is to have a drink in one of these places and indulge in the panorama. There are many decent warungs around the area that serve great Indonesian fare as well as Western tucker.

The routes are listed below in no particular order and are ex-Kuta. Take note that upon reaching the crossroads at Kintamani you will have to pay a fee to enter the area at Penelokan. 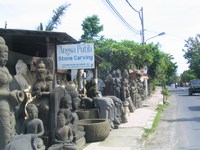 Route 1: This one I call the ‘tourist run’ to Kintamani mainly because it passes through several towns worthy of note – Batubulan for its marvellous stone carvings, mostly of Balinese Gods, Celuk where you will find the streets lined with galleries and shops selling gold and silver to the markets at Sukawati, the two-storey art market where you can buy goods at almost half the price you pay in Kuta. From there you pass through Batuan renowned for its many talented artists and it here you will find several art galleries and studios, then onto the large textile town of Gianyar famous for its Endek weaving and then through the sleepy town of Bangli where you will find one of the finest garden temples on the island – Pura Kehen – and finally onto Penelokan. 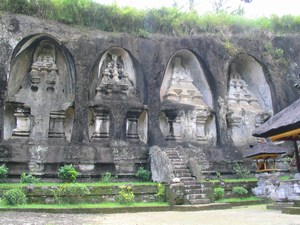 Route 2: Probably one of my favourite routes taking you through the archaeological centre of Bali often referred to as the holy land. Here you will find temples and artifacts dating back to the Majapahit period in Bali and several antiquities dating as far back as the 11th Century. The interesting part of this route starts at Blahbatuh where you will find Pura Gaduh and inside the temple the large stone head of Kebo Iwa. Further along the road is located Pura Dharma Bukit Durga Kutri. This is an interesting temple as it has superb carvings of elephants guarding the outer gates and oddly enough, pigs at the inner gate. Its main feature is the statue of the Goddess Durga perched on a sacred altar at the top of a steep flight of stone steps. Not far from here near the town of Bedulu is located Yeh Pulu, a sheer 25 metre cliff face that has been carved and depicts a five-part story of which the meaning is unknown. This 14th Century artefact is well worth visiting as is the nearby Goa Gadjah, also known as the elephant cave. Heading north from there on the left-hand side is located Pura Kebo Edan with its massive four meter statue. Although in a state of disrepair, this place is interesting for budding archaeological enthusiasts. A stone’s throw from there is Pura Penataran Sasih, home to the Moon of Pejeng. The bronze gong is said to date back to the Dong dynasty of Vietnam and the Balinese Bronze age. Twenty kilometres further north near Tampaksaring you will find the sacred springs of Tirta Empul. It is well worth spending an hour or two here simply for the stunning experience of it all. Probably the most sensational experience in the holy land can be found at Gunung Kawi sitting on the banks of the nearby Pakerisan River. The tombs (Candi’s) are of Anak Wungsu and his queens and are superbly stunning. From here it is a straightforward run up to Penelokan at Kintamani. 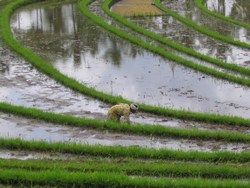 Route 3: An interesting and straight run north to the volcano with a few interesting places along the way. Firstly would be the artistic centre of Mas with its array of small galleries. The town is also home to some of the finest artists on the island. An interesting centre for wood carvings is the village of Tegalalang. Several workshops and galleries here are worth a look-see. Further along the road heading north you will come to another village known for its fine wood at Pujungkelod. From there it is only a few kilometres to Sebatu. The Pura Gunung Kwai Sebatu is an interesting temple. Sebatu is also a connecting point to Tampaksaring and the sacred springs or you can carry on further north to Kintamani. Nearby Sebatu is located the Elephant Safari Park at Taro. Actually, the village of Taro is home to the lowland Bali Aga and in this village you will find some unique longhouses. After visiting here it is only a short ride north to Kintamani. 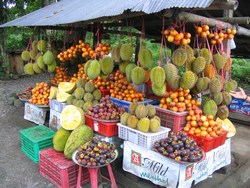 Route 4: Without a doubt the most straightforward and fastest way to Kintamani and the route that I often take when heading to the north-east of the island thus passing thought the area around Kintamani. The road takes you through the outskirts of Ubud and continues through areas of rich ricefields and some stunning panoramas. The further north you travel the richer the flora and the mountain views are a delight. Along the way there are several warungs worth stopping at for refreshments as are the numerous fruit stalls along the side of the road. Interestingly enough, the closer you get to Kintamani it seems as though the fruit for sale has a richer taste and definitely infinitely more delicious. Must be something to do with high altitude! At the end of your drive you come out on the Kintamani road at Kertabuana. There never used to be a collection point for access at this T-junction but there is now!