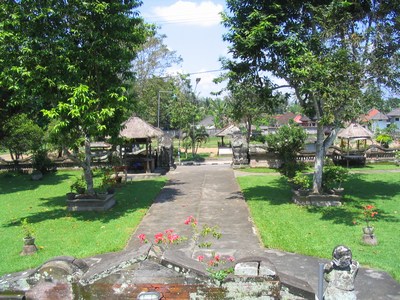 A few kilometres to the north of Goa Gadjah in Central Bali the road leads to the town of Pejeng. On the left-hand side just before you enter Pejeng, you will see the well-signed Pura and it is a beautiful temple renowned for the treasure it holds within – The Moon of Pejeng. To a lot of people it is just another temple but its history is interesting. Once the capital of the Pejeng Kingdom, Pura Panataran Sasih (lunar governance) was the state shrine. The Kingdom of Pejeng fell to Majapahit invaders in 1343. It has links to the Bali Aga mountain sanctuary of Penulisan situated north of Kintamani. The Pura itself is a wide-open area with several pavilions on either side. Each pavilion has an odd assortment of statues and sculptures dating from the 10th-12th C. These include groups of standing Gods (Batara Brahma) seemingly in prayer and believed to be an unusual representation of the Hindu Trinity, as well as commemorative statues of various old rulers of the Pejeng Kingdom. 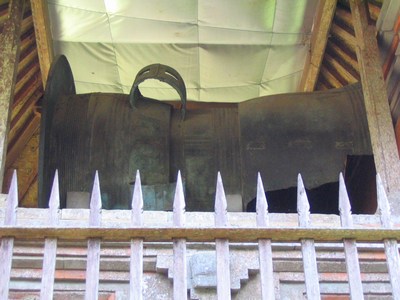 However, it is the pavilion in the rear of the courtyard, which holds the treasure of the temple – a highly revered and ornate gong called The Moon of Pejeng drum regarded as Indonesia’s most important Bronze-Age antiquity. Shaped like an hourglass, this beautifully etched drum is the largest single-cast piece in the world. Its length is roughly three metres. The antiquity is thought to be dated as far back as 300 BC around the time of the Bronze Age in Indonesia. Its origins are uncertain, and theories abound whether it was made locally or came from outside Indonesia. However, the intricately designed motifs on the drum, has strong connections with the Donsong culture of North Vietnam. This culture was the cradle of South-East Asia’s Bronze Age and indeed had a great influence on Old Indonesia’s ornamental art. Other scholars speculate the drum actually predates the Ming Dynasty and could have possibly been a gift from Kublai Khan to a Raja in Bali. Its history and antiquity are a mystery. 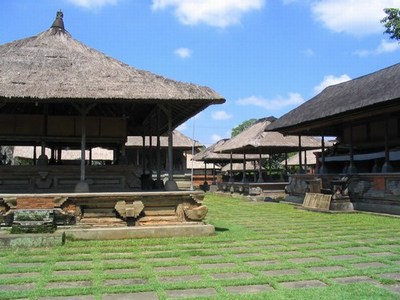 The ornamental facial patterns on the drum also have curious connections. Between the gong’s four handles are four heads. These are reputed to be the earliest representations of human faces in Indonesia. Upon close inspection the faces are heart-shaped with curved skulking mouths and large round eyes. Earrings hanging from elongated ears have a similar resemblance to certain ancestral figures and patterns found on the islands of Nias and Tanimbar. Naturally, the bronze has oxidised heavily and is an eerie blue-green colour. Talk to any of the ‘keepers of the temple’ and they will most certainly inform you of the drums supernatural qualities!

What I like is the legend behind this temple. The drum was one of the several moons that fell to earth and landed in a tree. Thieves wanting to ransack the temple were unable to go about their dastardly deeds because the moon was shining brightly. One of the thieves climbed a tree and urinated on the moon, which in turn exploded and fell back to earth as a drum. Other legends include that the gong was a wheel of a chariot of the moon. Another that the drum was the earplug of the mythical giant Kebo Iwo or of the Moon Goddess Ratih. 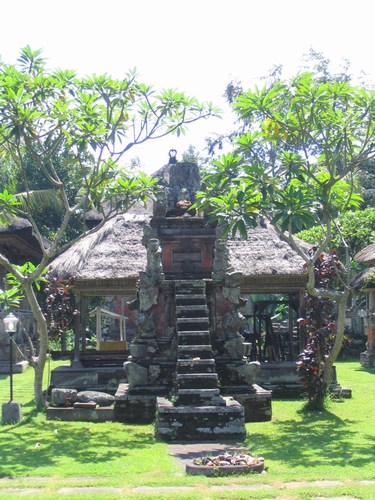 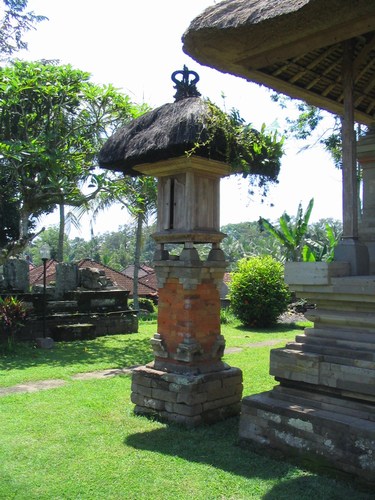 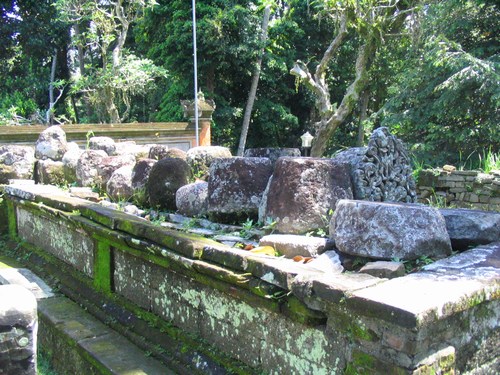