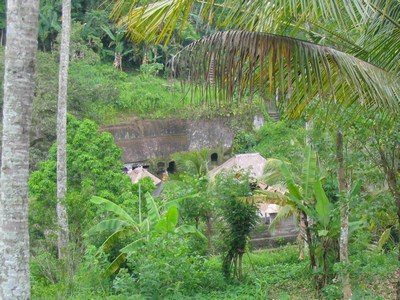 A breathtaking and awe-inspiring site located two kilometres south of Tampaksaring, Gunung Kawi is two rows of ancient royal tombs on the banks of the Pakerisan River deep in a ravine overlooked by terraced rice-fields. A long, steep stone stairway leads down to this ancient site. The holy Pakersian River flows through the centre of Gunung Kawi cutting the site into two separate sections with a bridge to connect one side to the other. It is believed the holy waters of the Pakerisan sanctify Gunung Kawi, and the eerie beauty of the place is evokes a peaceful atmosphere. There is parity with the tomb of Artaxerxes II at Persipolis and the Ellora Caves in India with Gunung Kawi. 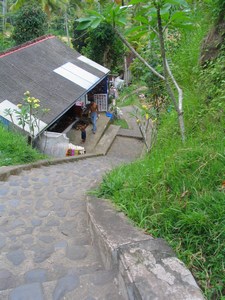 The complex does have an interesting history. Inscriptions over each Candi approximate the date of construction to be in the 11th C. Gunung Kawi was discovered by H.T. Damste in 1921 although the actual Balinese knew of it well before then. It is believed that each temple served as a memorial to a deified royalty principally because they are shaped like the burial towers, or Candi’s, found throughout Central Java. There is however a difference in the Candi in Bali to that of Java. In Java they are free standing whilst those found at Gunung Kawi are actually hewn reliefs in solid rock. Several theories prevail. The most probable being that the main group of five candi were built for King Udayana, his queen Gunapriya, a elder son and the youngest, Anak Wungsu. Anak Wungsu is believed to have become a hermit after giving up his reign over the kingdom (1050-1077 AD). However, another theory states the whole complex is in fact a mausoleum for Anak Wungsu, his wives and favourite concubines. 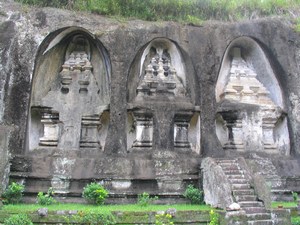 In total there are ten Candi. On the east side of the river are situated five candi which constitute the main group in this complex. The candi are to the left-hand side when you descend the stairway. Across the bridge are four candi on the west side. The remaining candi at the southern end is often referred to as the ‘tenth tomb’. It’s interesting to note that across the ravine from the stairway is located a hermitage which has long since been abandoned. At the bottom of the stairway and to your right-hand side through a small field (about one kilometre) is where the tenth tomb is located. It is regarded as a priest’s house, or ‘gria pendana’. It is believed to be the candi of a high caste official and possibly that of Anak Wungsu’s Prime Minister, Rakryan.

There is a Bhuddist monastery at the rear of the complex as you cross the bridge. There are cells hewn out of the rock around a stone pavilion within a courtyard. It is believed the monks that lived here were most probably the caretakers of Gunung Kawi. To the east of this main group of cloisters, there can be found a smaller and second group of cells and thought to be used for sleeping and partaking in meals.

The legend to this amazing place is intriguing. It is believed that the mythical giant Kebo Iwo carved out all of the ancient tombs in one night with his fingernails. 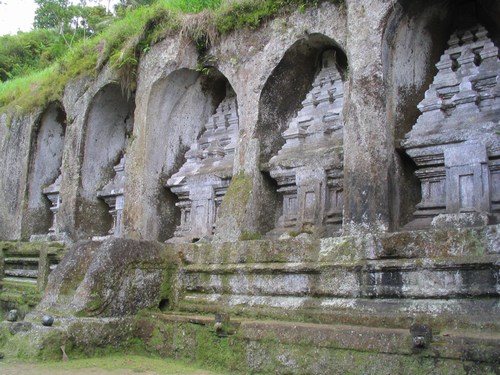 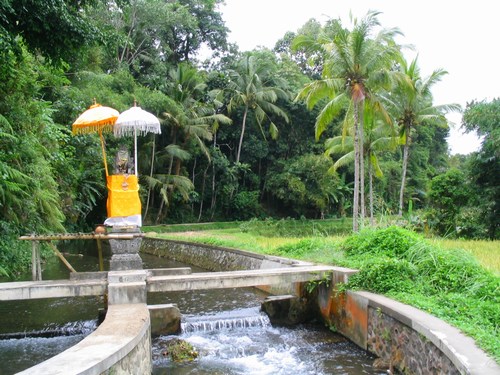