Off the Beaten Track: Muncan 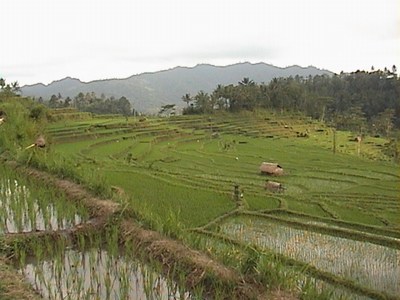 I have decided to start a new series on WhyGo Bali about places off the beaten track. That is, places that are off the main drags that the tourist buses go and quite a few visitors to the island don’t really know about. The first trip in the series will be to Muncan but, the round-about way. The trip actually includes quite a few scenic areas on the island of Bali as well as cultural attractions and places of interest. Starting the trip along the new southern freeway, Prof. Ida Bagus Mantra Bypass, head to the turnoff at Lebih. This will take you directly to Gianyar. This large town is famous for its weaving factories and are well worth a visit but it is on the outskirts of Gianyar at a place called sedan that is the first treasure – the Pura Dalem located on the side of the road. Located three kilometres northeast of Gianyar, the temple has some interesting attractions and the first being the exquisite kulkul drum tower. It is covered, literally, with some extraordinary bizarre and horrific reliefs depicting all manner of torture. The second is Durga in the form of the witch queen Rangda.

If you carry on a further three kilometres north along this road you will come to a place called Bunutin and it is here you will find a magnificent example of a Balinese temple in Pura Penataran Agung. You will have to walk about 150metres down a small track to get to the temple but you will find the large water lily lake magnificent with its two shrines on islands located in the centre of it. Interestingly, the two tiered red brick roof is rather unusual as is the legend associated with this temple. Returning to the main road to Klungkung, travel further until you reach the turn-off to Tihingan located not far from the village of Kuripan. Tihingan is famous for its gong-making and here you will find several foundries worth looking at. There are also several showrooms on the main street. From Tihingan head to Klungkung and continue on to Pasekbali, this is the turn-off to Kusamba but instead turn left and head along the road to the interior of the island. 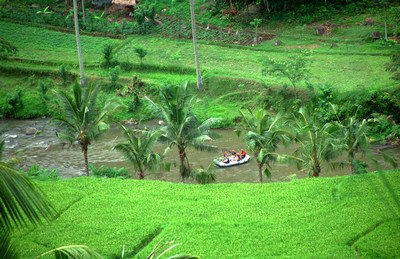 The village of Sidemen is your first stop along this scenic route. This stretch of road affords some spectacular views of paddy fields. Sidemen is renowned for its endek weaving using foot-looms which is a rarity on Bali these days. One workshop worth visiting is Pelangi. From here head further north into Walter Spies and Theo Meier territory, two of the most famous European artists who painted stunning scenes of Balinese culture. They both lived in a village called Iseh and it is here you will see stunning view of Gunung Agung. Travelling further north to Duda you come to a T-Junction and it is here you turn left and head past the village of Selat where you will find some spectacular panoramas of rice terraces against a mountainous backdrop. Further along this road you come to the tiny village of Muncan, a place known as a base camp for those wishing to climb Gunung Agung. All through this area the Telaga Waja River flows. Naturally, it is here where you will find the starting point for those adventurous people wishing to imbibe in rafting the river. The whole area around here is a pure delight for photographers, hikers and adventurers.

If you carry further along this road you come to Rendang. From here you can head north to Pura Besakih or to the south, Klungkung. Anyone considering this trip I would recommend using the latest edition of the Bali Street Atlas published by Periplus and available at most bookstores in the main tourist areas.