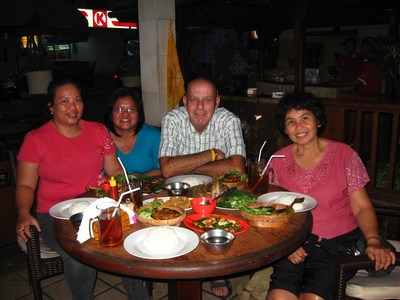 There are a couple of things I like doing when I return to a place that has been an important part of my life for so many decades and the first being to meet up with old friends, catch up with the latest gossip and in general, enjoy each others company. The second thing I like is discovering. I do this by walking around town and to see what restorans have closed down and what new places have opened. Last night it was a matter of the former. Two very dear friends of ours, Meli and Dina, came around to the Prawita for a good ‘ol chinwag and, as things eventuate in the course of a conservation, the subject of food was raised. See, the funny thing is I knew what I wanted to devour but when it’s three against one and ‘they’ being all female, it’s a sure bet you can figure out who loses out. However, a bit of the grey matter usage by the ‘mere male’ gave them a choice of two restorans. I always go to Plengkung Restoran on Jl Raya Kuta for some delightful Javanese seafood the first week I am in town. So, ‘mere male’ suggested Kafe Batan Waru on Jl Kartika Plaza. My devious plan seemed to work because I had the three of them in discussion that would rival any in a UN meeting. Yes my friends, it was to Plengkung we went and such a repast we enjoyed. 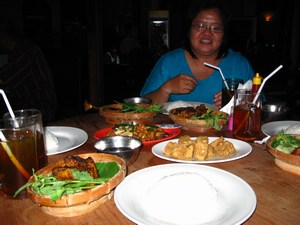 As most of you know, this time of the year in Indonesia it is the rainy season and because this doesn’t exclude Bali it naturally pissed down all night giving me three showers in one day which of course was nice for the skin but a total disaster for clothing as one walks around with the weight of a sodden burlap sack. Anyway, into a taxi we all piled and not long after found ourselves sitting at our usual table perusing the menus. Mere male knew of course what he wanted but it was not long before the UN meeting opened again and the discussion began as what to devour. I felt sorry for the waiter standing there patiently holding pen poised over the pad. I could tell he didn’t like discussions, meetings or even debates! Obviously, this was not a part of his job resume. Get the party started Barrie. Thrust and parry, my order was in before the trio had a chance to utter a consonant. “Gurami Bakar…large please…Kangkung, Tahu Goreng and nasih putih. Oh, and iced tea please” Victory was mine in a flash! 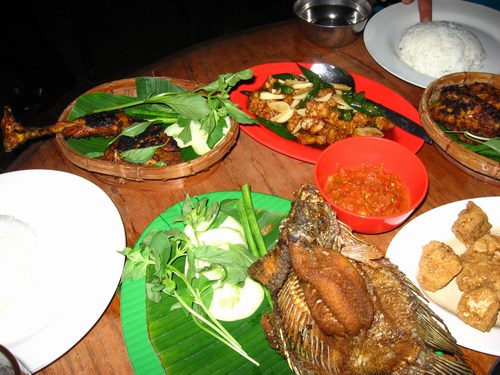 Why is it the female of the species always discuss their choice of food? Mere male knew instantly what he wanted. “Pesan apa bak” the waiter said. All of a sudden like a revelation the orders came thick and fast. I was taken aback at the speed and accuracy of it all. Besides my delightful choice of food, the selection from the trio was amazing and included two serves of Gurami Goreng, Oseng-Oseng, four serves of Ayam Goreng, Perkedel times three and nasih putih the same. It definitely covered the table with a gastronomic spread. Oh, and there were three kinds of Sambal also. Don’t you love it when a female takes control! 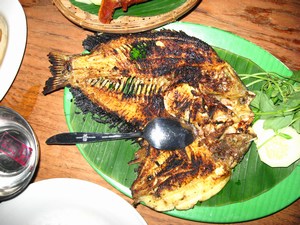 After copious amounts of Bali coffee, our starvation sated, the bill naturally came to the mere male whom I might add was pleasantly surprised. Rp170,000 was the total and a delightful and scrumptious meal was had by all. If you like Javanese seafood at its best then you really can’t go past the value for money establishment of Plengkung. I will always give it five stars.