Getting Nearer to Traffic Jams and Sidewalk Mayhem

I sat down in front of the computer in my study this morning, gazed at the calendar on my desk and suddenly realised that Santa Claus and his weary bunch of drunken reindeer will soon be cruising the skies. You either love Xmas or you hate it. To me, I am not concerned either way, however, it is a time in Bali when every place and every road seems packed with smoke belching cars and the streets, full of red-faced sweaty people. Yep, the Xmas onslaught will soon be upon us. The festive season is a period in the year when the majority of domestic tourists from all over Indonesia drive from their respective towns or cities to spend a bit of R & R on the island of the Gods. Not only that, there is an increased influx of foreign tourists to the island. So, we have traffic jams in the streets 24/7, pathways turned into sardine cans as you struggle to pass the person in front of you and at the same time keeping your balance so as not to step off the pavement and get hit by mad motorbike riders or a car where the driver is too busy perving at the scantily-clad western women walking down the street to even notice his car is veering towards the sidewalk. Don’t you just love Xmas! 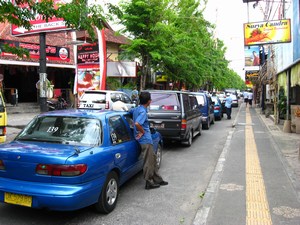 Yes folks, it’s less than five weeks to Xmas. Shit, I had better think of a present for my wife. Got a great idea. Perhaps one of those super-dooper masks you can wear so you don’t inhale the pollution pumped into the atmosphere. I can just picture her now wearing it on her beautiful face as we sit down for breakfast. Unfortunately, the homestay where I reside is right on Jalan Legian and in between the two Poppies Lane’s which means, in general, that by 8am the road is starting to bank up as drivers who have arrived at Bemo Corner can’t make up their bloody minds which way to go! Or, maybe it might not be as jam-packed as I am thinking. Domestic tourists are flying less and according to an article in the Bali Discovery, Bali’s foreign tourist arrival numbers through the end of October have yet to show any ill effects from a much-feared coming drop in tourist arrivals precipitated by a growing global economic crisis.