From Seminyak to Tanah Lot – Along the Beach 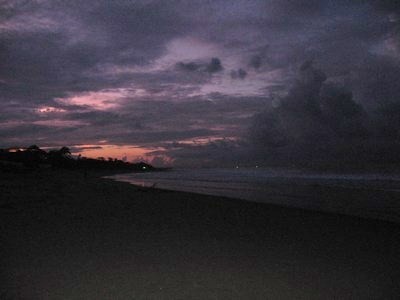 The whole concept of a short-long stroll along the beach from Pura Petitenget to Tanah Lot was conceived last week after the four of us through a few crazy suggestions together and the beach walk won. The sojourn had been put off a couple of times thanks to the intervention of Mother Nature in the form of heavy storms and high waves pounding the shoreline thus preventing a clear passage along the beach. Thanks to a break in the weather, Carl, Arti, Candika and myself set out from Pura Petitenget a few days ago to walk to Tanah Lot. As you can imagine, most of the Balinese we talked to about this walk merely laughed and regarded the sojourn as a crazy bule idea. Probably because nobody had ever done it before and the Balinese did not have the inkling to put their bodies through such ‘suffering’. I can imagine that a lot of you reading this will say the distance is not far and rightly so because it is only 9.8 klms, but, very soft and deep sand, multiple river crossings and the occasional diversion from the beach because of rocky shorelines does take its toll and time. Combine that with the incessant heat of the day and you have one hell of a walk. 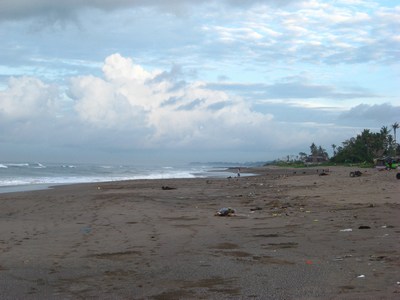 We started off from Pura Petitenget at 6am before first light had broken but on reflection, we left it a bit late. I would advise you start your walk along the beach at least a half hour earlier. This reason will become apparent later. Low tide and a hard sand by the water’s edge made the going fairly easy and I was indeed quite surprised the amount of people on the beach at that time of the morning. The plan was to walk as far as we could in the first hour and then do a kilometre-check on my pedometer. The soft, gentle offshore breeze made a symphony with the breaking waves. Enter the morning sun casting its first rays of light softening the colours of both the sand and sparse shacks. Perahu’s scattered here and there like elongated shadows became alive and before too long, the vast stretch of coastline ahead was in view and became our guiding line, the tip of the headland our destination. With only a couple of shallow river crossings we had walked along the beaches of BatuBelig, Browo, Canggu, Nelayan and, by the fist time and kilometre check we had walked 5.2klms in an hour and a half stopping for breakfast at the magnificent Hotel Tugu Bali located at Pantai Batu Bolong. With no warung in sight, we had no choice but to eat there. The one thing I did notice along these beaches is the gradual lessening of human garbage amongst the refuse washed onto the shore. More and more, coconuts and beautiful pieces of sea-washed driftwood would be the subject of our gaze as were the array of seabirds. 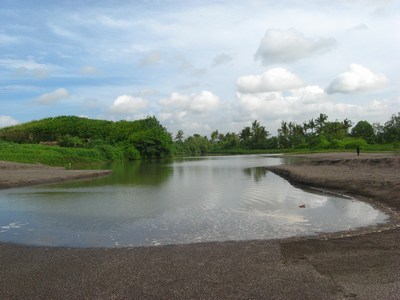 With our stomachs fed we continued on our journey at 8.25am taking the path down along the rocks to the beach. By now the tide had made steady progress advancing onto the shoreline quicker than we realised forcing us to walk higher up along the beach. This caused us all to walk with one leg higher than the other and in soft sand thus zapping energy quicker than we had anticipated. Any attempt to walk in the wet sand in this manner with such turbulent surf was impossible. The shoreline became rockier the further we walked and crossing the smaller rivers was relatively easy and before too long we has walked along the stretches of Batu Mejen beach and Perenean beach. When we finally arrived at the coastal village of Seseh, a rest-break from the sojourn was agreed upon and we sat on some large structures of driftwood watching local women and children playing and bathing in the muddy waters of the river. The locals were intrigued as to why we were walking along the beach and after informing them we were walking to Tanah Lot a majority of them broke into hysterical laughter. Such a deterrent made us even more determined to reach our destination. Each time we asked any Balinese we came across on the beaches so far as to the distance we had to go to arrive at Tanah Lot, the kilometres varied from 10 up to 23. Of course the added sniggers and laughter didn’t help. The further we walked along the lonely stretches of quickly blackening sand the hotter it became, this being another obstacle on such a journey. We had brought eight litres of water between us but this was soon consumed under the oppressive heat. Another obstacle started to plague us. Rocky outcrops were more and more frequent causing us to leave the beach to find pathways around them, a time-consuming process that was to play havoc with the body’s strength. 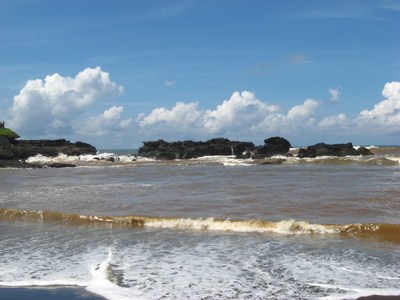 At one point, not far from Mencening Beach we were forced to walk a kilometre inland and circle around a headland. This turned out to be a blessing in disguise as we came across a shady warung. Copious amounts of Pocari Sweat were consumed and it gave us time to take stock of where we were with the helpful assistance of the locals there. According to them we had less than 2 kilometres to Tanah Lot. However, they gave us no warning of what would become our greatest obstacle of all. We eventually made our way back down to the beach and continued walking the length of the very long Mencening beach. A headland upon which sits divinely Pura Luhur Batu Ngaus. Because of the turbulent ocean crashing against the rocky promontory we were once again forced to venture inland to find a path around to return to the beach. After walking through sawah fields for a half hour finally we found a small path, albeit rocky. The sea-garbage strewn beach from that point was relatively hard making walking easier and as we passed by other temple structures I had the feeling that our goal was not far away. The ocean around there seemed to pound the shore viciously and the waters were a murky bracken colour. After turning the next headland I knew our goal was really in sight when I saw on top of the cliff the sprawling fairways of the Nirwana Golf Course. 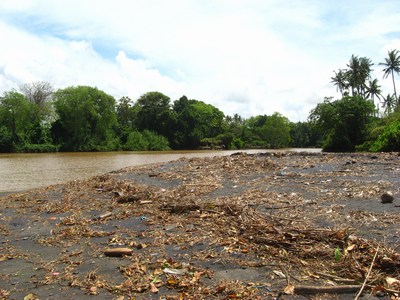 One last river crossing and we could walk around the base of the cliffs and enter Tanah Lot along the coastline. Nobody along our walk had mentioned this last river crossing or its ferociousness or in fact about the three local people who had lost their lives being swept out to sea in their attempt. We dropped our backpacks in the sand and scanned the length of the river looking for a suitable place to cross. The river’s current was running so strong that when the waters rushed into the sea, a backlash of waves was created along the estuary. Carl tried first. As he gingerly waded into the murky water up to his waist, he was suddenly neck-deep and quickly retreated to the shore. Carl tried again in a different place but was soon met with the same fate. I walked further towards the estuary end and entered. At first it was only knee-deep but then the whole ground gave way underneath me and I felt like I was being sucked into quick-sand, my body being spun around and before too long, I was underwater. With no other visible means of getting across this vicious stretch of water we were once again thwarted and sought an alternative route around the river. Walking downstream along and through the natural garbage strewn banks, we eventually came across a set of stone steps meandering upwards through the vine-clogged jungle. The oppressive heat of the morning sun was taking its toll on all of us and we were soon to be disappointed even more as we reached the top of the steps. Kilometre upon kilometre of sawah fields stretched to the horizon, a few villas dotted here and there, and a small narrow limestone path was all we saw. We had no choice but to follow the path. 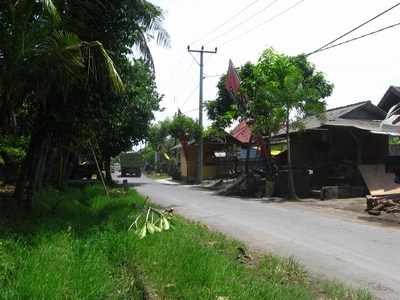 Coming across one villa Carl decided to ask the residents about crossing the river, if there was a boat available or even horses we could us. The disappointment on his face when he returned was enough for all of us. To come so far and yet so near and have a simple river crossing thwart our plans. A chat with a farmer further down the path truly sealed our fate. No, there was no bridge. The farmer’s wife offered to take us to the nearest village where we could get transport to Tanah Lot. Left with no options, we all agreed and the farmer’s wife ferried us on the back of her motor bike one-by-one to the village of Keliki. Deeply disappointed, we found a warung and waited for the Bemo to arrive. As we sat in the shady warung consuming cold drink after cold drink, it was the general consensus that the journey had been on heck of an adventure and the fact that to our knowledge no Balinese had attempted this walk and either had any other westerner. A sobering thought as it was, when the Bemo arrived to ferry us on the last leg, we all secretly wished we had completed that last kilometre by foot along the craggy shore.

When we eventually arrived at Tanah Lot with its parking area full of tourist buses, we looked at each other and laughed knowing that at least we had attempted to make it here in an unusual manner. I think what really upset us all was when we walked down to the base of Tanah Lot temple and looked back along the coast at the last leg of what would have been the last kilometre of our journey (foto below). 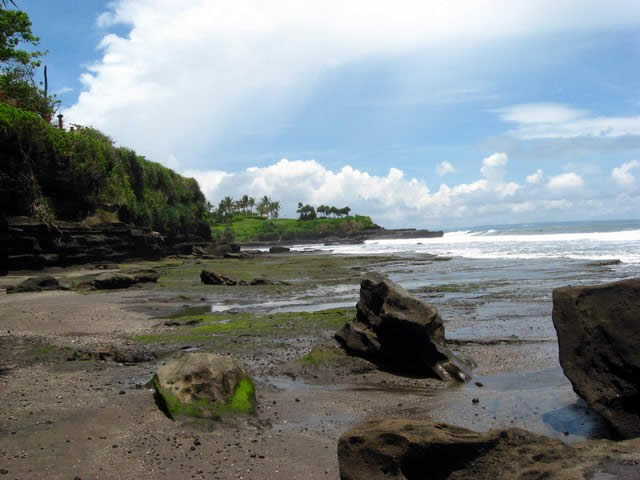