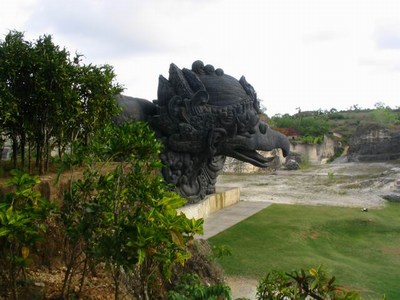 As one travels around the island of Bali besides seeing the stunning and varied temple structures you will inevitably notice the many statues erected in towns and small villages. It appears as though Bali has this penchant for statues! This is extremely noticeable if you visit the town of Tabanan north-west of Kuta. There seems to be a statue at every traffic intersection, roundabout and there are even statues partially hidden along the sides of the road and down small side streets. Travel anywhere in the tourist strip and into Denpasar and you will see monuments erected to the Gods or commemorating an event that occurred in the area. There are also many statues dedicated to fallen heroes such as the massive statue of Ngurah Rai near the airport. So, when you are walking around the tourist areas or out in the country zipping through town after town on your way to a destination, take time out to admire these remarkable structures. You will be amazed at their intricacy.

Garuda Wisnu Kencana Complex: The Garuda Wisnu Kencana complex, situated on a limestone hill in Jimbaran, is an integrated cultural centre with a 140 meter-high statue as its landmark. Almost a decade after construction started in 1996, only 15 percent of the park’s master plan encompassing 200 hectares in total has been realized due to budget constraints. Garuda Wisnu Kencana is the brainchild of Nyoman Nuart, a Balinese contemporary sculptor, who raised the idea in 1992. The complex’s 45 meter monument consists of a 70 meter-tall base and a 70 meter-tall statue of the Hindu deity Wisnu astride the mythical bird Garuda. When it is fully realized the Garuda Wisnu statue will be the tallest statue in Southeast Asia. The statue is to symbolize a harmonious relationship between human beings and the natural environment as well as the spiritual life of the Balinese people.

Griya Pecatu Alam: Located on the road to Uluwatu and not far from Dreamland on the southern part of Bali in sahadewas are in fact two striking statues. At the time I visited there several years ago the villa development was at its infancy stages. Griya Pecatu Alam was an integrated resort area in Bali with total area 450 hectares. Since then it has gone bankrupt and started up development and not long after funding for the development ran out. The statues are located at the entrance to the development.

Puputan Badung Monument: Located in Puputan Square in Denpasar the monument is a striking memory of suffering at the hands of the Dutch. At the time of Dutch arrival in Bali in 1906, the Balinese decided to take a firm stand against them and as such led by the King of Denpasar they chose to commit suicide rather than surrender. Historic facts reveal that about 4000 Balinese people, including the royal family of Bali died and so began Dutch rule. The Puptuan Badung Monument shows a parent and two children-carrying knife (Keris) and bamboo post ready to fight. Surrounded by beautiful gardens, this is a peaceful area of reflection.

Bali Memorial Monument: This touching and emotive monument was erected after the tragic and vicious bombing in Bali of 2002. A must-see for any first-timers to Bali, it is a monument that evokes different feelings for all people. Do visit this place and, do pay your respects to those that suffered the atrocity in 2002. 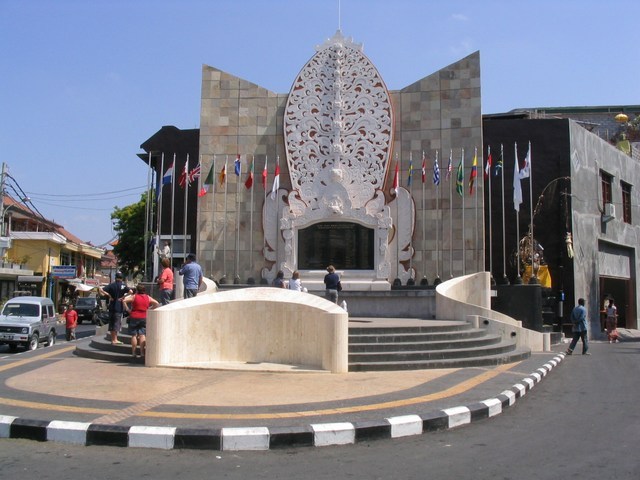