Five Temples to Visit for First Timers to Bali 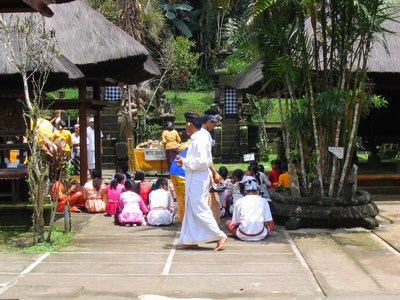 Travelling to Bali for the first time can be overwhelming, not only in the cultural shock of it all but, with so many things to do and see as well. As most tourists are on a short trip meaning a tight schedule, figuring out what places to visit can be frustrating. Of course shopping is high on the list of first-time travellers as is a visit to see the sunset at Kuta Beach. On an island with over a thousand temples getting in a bit of Balinese culture and seeing a temple or two whilst balancing your time relaxing can be a tad too much for the system. I have written previously about many of the less known or less visited temples and so choosing five temples I would recommend for first-timers wasn’t too hard! All of these temples are included on most itineraries in hotels and travel agencies.

Pura Besakih: Besakih temple is the most important temple in Bali. Known as the Mother Temple, Besakih sits on the western slop of Gunung Agung, the most holy place for Balinese Hindus. Getting to Besakih from Kuta is quite easy. Follow the fast track coastal route until you see signs for Klungkung, at which point you head north looking out for sign for Besakih. You should be at Besakih in around 2 hours from Kuta. The temple can be a bit of a tourist trap, especially during the day. In the evening it quietens down and may be a better time to visit. Besakih does have a system of temple guides, which can be annoying for some people. 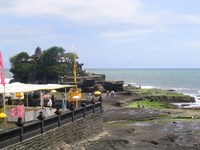 Pura Tanah Lot: Located in Tabanan, about 20 km from Denpasar, the temple sits on a large offshore rock which has been shaped continuously over the years by the ocean tide. Tanah Lot is claimed to be the work of the 15th century priest Nirartha. Tanah Lot temple was built and has been a part of Balinese mythology for centuries. The temple is one of seven sea temples around the Balinese coast. Each of the sea temples were established within eyesight of the next to form a chain along the south-western coast. At the base of the rocky island, poisonous sea snakes are believed to guard the temple from evil spirits and intruders. 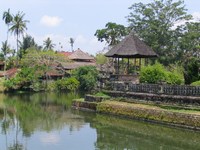 Pura Taman Ayun: Pura Taman Ayun was built in 1634 by the the Raja, I Gusti Agung Anom. The kingdom of Mengwi was powerful enough to control large parts of Badung, Tabanan and Gianyar from the first part of the 17th Century to the latter part of the 19th Century. The temple is surrounded by a moat and is set on 3 different levels, the inner courtyard at the top having its own moat. The inner compound is complete with magnificent meru’s, bales and shrines. As many people know the higher the meru the more important it is. The number of roofs is always an odd number with the maximum possible 13. There are 3 very important merus honouring the 3 most important mountains in Bali, with an 11 tiered meru representing Gunung Agung and Gunung Batkaru and a 9 roofed meru represents Gunung Batur. It is possible to visit the temple at a leisurely pace in an hour or less. 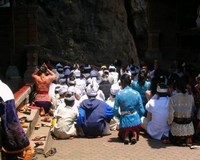 Pura Goa Lawah: Goa Lawah means ‘bat cave‘ in Balinese, and in Bali, Goa Lawah is a famous tourist attraction, as well as a place of religious importance to the Balinese people. The temple was founded in 1007, by Empu Kuteran. Though the temple is small, it is considered very auspicious and is one of the 9 kayangan jagat (directional temples) that protect Bali from evil spirits. The temple at Goa Lawah protects Bali from the SE. The parking area and souvenir sellers are in front of the temple, which itself is quite small. There is a 11 tier meru inside, donating its importance, but the actual temple is quite small. It is possible to visit Goa Lawah during ceremonies. The cave itself is in the rear of the temple, up against the cliff. Inside are hundreds of fruit bats and legend has it that the cave extends all the way underground Pura Goa, at Besakih temple 30 kms away. The cave is the dwelling of Balinese naga, Basuki. 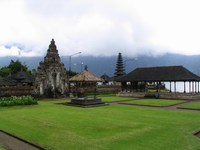 Pura Ulun Danau Bratan: Without a doubt the most picturesque temple on the island. Situated on Lake Bratan, this half-Hindu, half-Bhuddist temple juts out onto the lake. An important irrigation temple dedicated to Dewi Danau, the Water Goddess. The 11 roofed meru is a spectacular sight at dawn or dusk. The nearby Botanical Gardens (Lila Graha) are a definite ‘must see”. Pura Ulun Danau Bratan is one of Bali’s kayangan jagat (directional temples) and protects Bali from evil spirits from the NW. Located 2 hours north of Kuta, Pura Ulun Danau Bratan in the Bedugul area, a common directional indicator used by locals when referring to the area of the 3 western mountain lakes. Pura Ulun Danau Bratan was built in 1633 by the raja of Mengwi. The Balinese people rely on their rice harvest and the Goddess of water / fertility, Dewi Danu is the deity who is honored here. The part of the temple that gets all the attention is the 11 roof meru, followed by a 3 roofed meru, situated on a point of land, jutting out into the lake. The larger meru is dedicated to Wisnu and Dewi Danu. The smaller meru contains a lingum (phallus), very much a part of temple architecture in India. This temple is dedicated to Siwa (the Destroyer). The temple on the shore, Pura Teratai Bang has its own 7-tier meru dedicated to Brahma (the Creator).