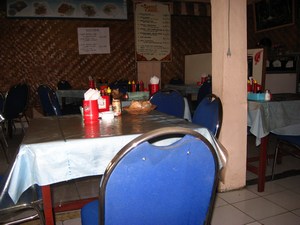 I like a nice laid-back night, one where you can just pick a place to enjoy a good meal and after, just wander around enjoying the insanity that is the Kuta strip. Candika and I had no real concrete plans for the night although I did need to check my email, eventually. My better half suggested we go to one of our favourite eateries and not knowing which one she had in mind, I agreed. The rain had been holding off for a better part of the afternoon so the forecast for a pleasant night ahead was indeed promising. It was a case of ‘follow me’ as we made our way out of the Prawita cottages and headed to Poppies Lane II where as most of you know there are some good restorans and warungs. Candika walked down the gang between Poppies I and II the thought of Sumatran food had me salivating. The choice of warungs with excellent food along Gang Ronta is amazing. Damn it!, I thought as she walked right past the Masakan Padang place but she did enter Fajar’s Warung and so the choice of islands changed. 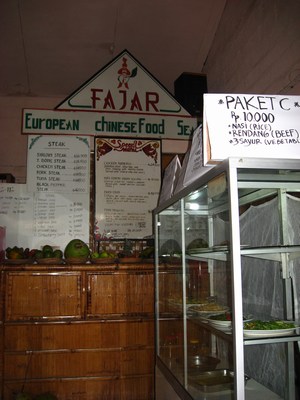 Fajar’s is a place frequented by travellers and rarely have I seen your regular tourist in the establishment. Maybe it’s the simplicity of the interior with its plain bamboo tables with vinyl coverings that puts them off or the sight of the array of food sitting in a glass cabinet protected only by a thin piece of cotton mesh. Maybe it’s the openness of the place with its natural air conditioning and the low slung ceiling fans that appear not to have been cleaned in a donkey’s year. Whatever the case, I don’t care because Fajar’s is a top quality place with an extensive menu of Indonesian, Chinese and European food. Besides that, it is embarrassingly inexpensive and a great place where you can relax and enjoy a meal in a clean atmosphere.

It was a night for Nasi Goreng and Candika’s choice was a brave one. She chose your usual Nasi Goreng Ayam but my better half insisted it be extra spicy. Shit, I ain’t that brave! When I saw the amount of diced cabe rawit mixed in with the fried rice I almost started perspiring for her. I decided on a less macho meal but a Javanese favourite – Nasi Goreng ikan Asing. This dish has a lot of dried, heavily salted fish diced and pan-fried with the rice. However, because of the heavy salt content it does leave you with a bit of a thirst and I downed a couple of iced teas compared to Candika’s solitary glass. After a delightful repast, paying the bill was a pleasant surprise. Total cost for all that was Rp28,000.

This place I give four stars for a pleasant place to eat and a decent five stars for food quality and service. Fajar’s also does breakfast and has an excellent choice of takeaway (bungkus).