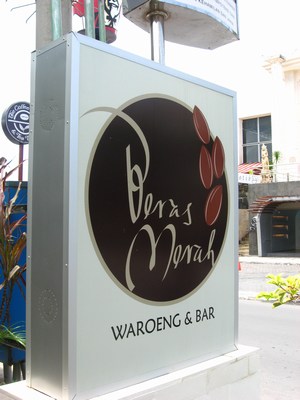 Ever had those times when you see a new restoran or warung but it takes you seemingly forever to visit it for a meal? Since I have been back in Bali there is one place located opposite the Centro Discovery Mall in Tuban called Beras Merah and for the last few weeks I have said to Candika that we must go there and check it out. We eventually did that today after a healthy walk from south Tuban up to the Mall. Naturally both of us didn’t know what to expect which is normal when eating at a place for the first time but, we were pleasantly surprised. An extremely super-clean and beautifully appointed Balinese interior greeted us as we entered and instantly we were seated and attended to by very polite waitresses. The atmosphere is pleasing and relaxing but definitely not pretentious like you will find in other classy restorans. Beras Merah is predominately Balinese food with that exquisite touch and is relatively inexpensive. It’s the kind of place you would take your favourite person for a romantic dinner. 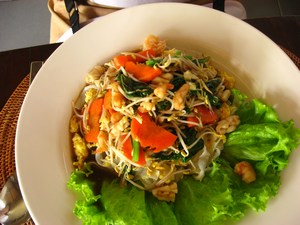 The interesting selection of traditional Balinese dishes were numerous and they all were tempting but eventually Candika decided to imbibe in the Kwetiau Siram (Rp48,000), softly cooked flat noodles upon which was placed pan-fried seafood in a Balinese bumbu sauce with a side serving of fresh salad. When I looked at the large portion I thought she would never get through it all but Candika managed to succeed as she always does. In one word Candika said it was delicious but the portion was far too big. As for your truly, after seeing the size of Candika’s meal I thought I would play it safe and order the Satay Campur (Rp58,000). Again I was pleasantly surprised. The eight sticks of sate’d meats came seated upon a charcoal grill and I enjoyed turning the sticks as I ate. The nasih putih was wrapped in a banana leaf and topped with crispy strips of fried onions while the separately wrapped fresh raw vegetables were placed in a banana leaf topped with a fresh strip of Kemangi. On the plate were placed to small bowls, one containing a delicious peanut sauce and the other, sambal terasi. When my iced-tea arrived it wasn’t in the usual size glass but rather a long-stemmed one with a large piece of lemon grass within. All were delightfully yummy and definitely moorish.

Beras Merah is a restoran that is extra special and like I mentioned before, a great place to take a loved one or if you prefer, to meet that special friend. Beras Merah gets a five out of five from me simply because the food is scrumptious, the service superb and the atmosphere and décor, outstanding. 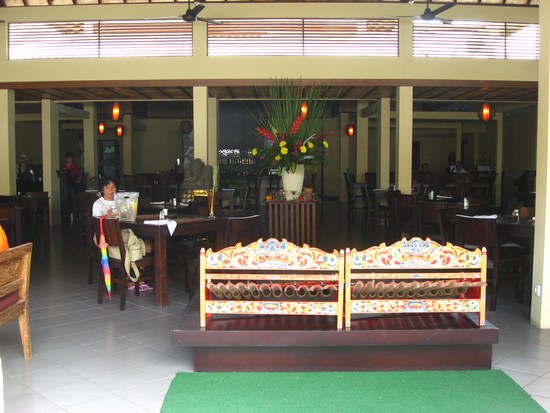