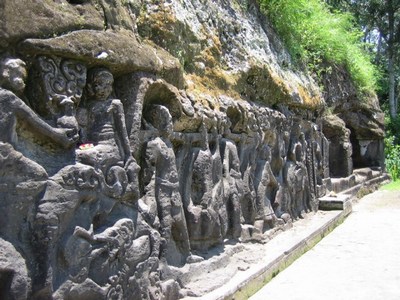 One kilometre east of Goa Gadjah, you will see the well-marked signs to the site of Yeh Pulu. A short walk through rice-fields is entailed to reach the site. There are no shortages of guides to take you there for a nominal fee. Yeh Pulu is a small hermitage dating back to the 14th C. This antiquity is a unique frieze carved into a cliff face some two metres high and twenty-five metres in length. For centuries it was buried under volcanic eruptions and of course the jungle vegetation. The site was excavated in 1925. What was found was the most unique and mysterious sculptured structure of the Middle Balinese Period.

This 14th C hermitage comprises a unique frieze some two metres high and twenty-five metres in length. The life-sized frieze is framed with carved, decorative leaves. The illustrative crude chiselled carvings relate everyday life in Bali, even though it has been done in a primitive manner. The relief depicts various figures in postures, walking, playing with animals, and farm life. There are also hunting scenes portraying the acts of capture and slaying of boars and bears, even animals slaying other animals. Interestingly there is no religious connotation to the whole relief. It is a mixture of all levels of society in daily life. The only deity represented at this antiquity is Ganesha, the elephant-headed son of Vishnu. This is carved into a niche to the far right of the frieze length.

In his book ‘Monuments of Bali’, Bernet Kempers points out that the relief represented stories from the life of Lord Krishna, an incarnation of Vishnu. He cites the hunting scene for example saying it corresponds to the Hindu legend of Krishna defeating the bear Jambavat. There is an interesting legend – The frieze was carved out by the mythical giant Kebo Iwo using his thumbnail.