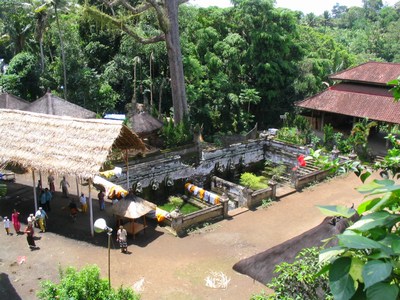 Between Peliatan and Bedulu, the antiquity of Goa Gadjah is located on the side of the road some 25 kilometres from Denpasar. The actual site appears to sit on the edge of a steep ravine of the Petanu River. There are the ubiquitous sellers stalls in the carpark and the area leading down to a lower level, and it is from there, as you look down into the ravine, that the mouth of the ‘Elephant Cave’ is visible. It is without a doubt an awe-inspiring sight. If you plan on visiting this antiquity, try and arrive there before 10am when the tourist buses start arriving. 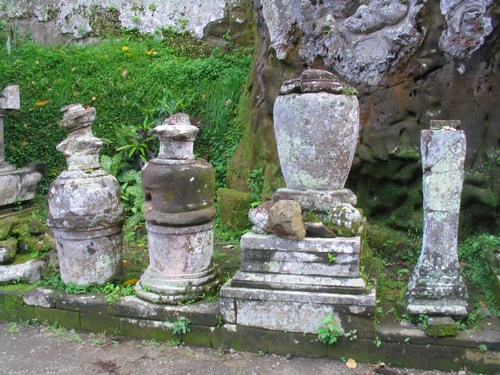 Dutch Archaeologists date the site back to the 11th Century around the time of King Airlangga’s reign in Eastern Java according to inscriptions found at the site. Originally a Bhuddist Monastery, up until 1923 it was known only to the local people, and in 1954, the fountains and bathing pools nearby were excavated. There is uncertainty if Goa Gadjah was in fact used by Bhuddist or Hindu monks as a hermitage similar to the ‘hermit cells’ in eastern Java. There are Hindu and Bhuddist sculptures inside and around the cave, which points to a cohabitation of religions, but whether this occurred is not actually verified. 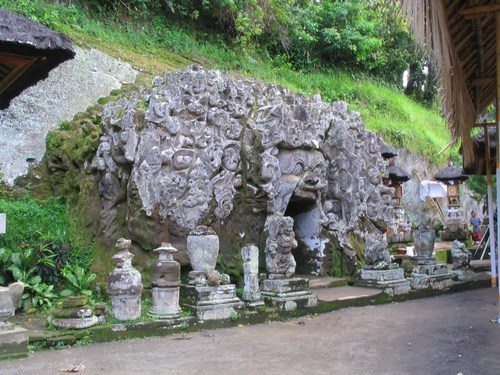 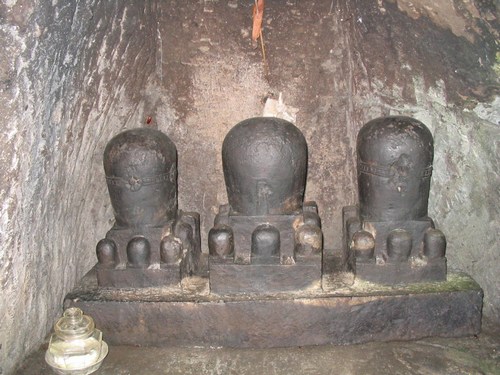 What is of relevance is the actual name of the antiquity. According to archaeological research, The Nagarakertagama (an old Javanese chronicle) written in 1356 AD, gave mention of a hermitage called ‘Lwa Gadjah’ kept by a high ranking Bhuddist. Literally interpreted means ‘Elephant River’. It was assumed the reference was to the Petanu River nearby to the cave. There are other theories. The name ‘Elephant cave’ derived because of the statue of Ganesha inside the cave, and, another giving mention to the cave being named after the river (when it was known as Elephant River). 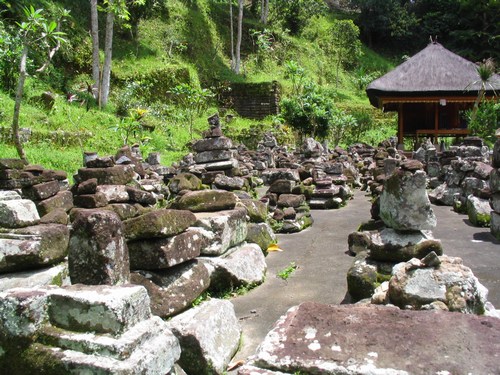 There are roughly 80 steps in the steep descent to the site. Once in the courtyard of the site, the exterior of the cave mouth is confronting. The cave, cut into rock, has a flat top – regarded by researchers as a place of meditation. Above the entrance to the cave, a monstrous head with bulging eyes (which view to the left-hand side), with large hands either side appearing to be pushing back the rock. The whole figure is ornately carved and there are many theories regarding the façade. It is said to represent Rangda the Witch Queen, while other historians believe it to be Bhoma, the son of Vishnu and Pertiwi. There are numerous carvings on the exterior of the cave depicting forests, animals and people running in panic.

To the left-hand side of the cave mouth is located a statue of Hariti in a small pavillion. It is recorded this dates back to the Old Balinese Period (1000 AD). Hariti is surrounded by small children. Once a devourer of children, Hariti was converted to Bhuddism and became the protector of children.

Inside the T-shaped cave it is two metres high and only one metre wide causing one to bow in a bizarre manner. The actual passageway is nine metres long leading to the T-junction. To the left-hand side, there is a 100cm high statue four-armed statue of the Elephant God Ganesha (son of Shiva). The Elephant God’s nature was warlike and is evident with the axe, a broken tusk, a drinking vessel and beads held in his four hands. To the right-hand side are the three stone phalluses (or lingas) of the Hindu God Shiva and the female counterpart known as the Yoni.

In an area facing the cave entrance, are the Bathing Pools. There are two distinct sections, believed to be separate bathing areas for men and women. When the Dutch Archaeologist Krijgsman unearthed the pavilions after WWII, each bathing pavilion had four large waterspouts each supported by six ‘Widyardi’(standing nymphs). The Bhuddist and Shivaistic elaborate carvings are symbolically religious. 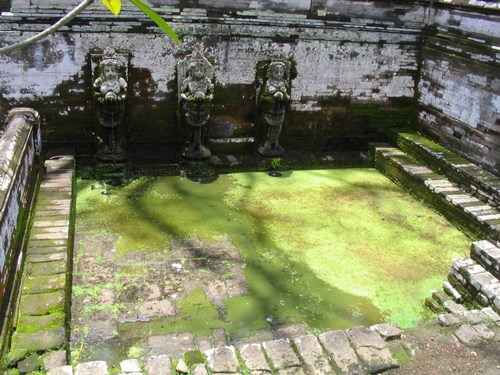 At the rear of the bathing pavilion there is a path with a steep descent to a smaller antiquity. There is a Candi with two 9th C Bhudda statues. Nearby are several fragments of what appeared to have once been a large bas-relief believed to have been carved on a rock-face higher up the ravine. Close to this area are situated two five-metre high stones shaped like stupas. These antiquities are believed to be dated around the 10th C, and according to Archaeologists, are from the reign of Kesari, a Bhuddist king who ruled Bali during the Central Javanese Period. According to legend, the great hollowed-out rock face was the supernatural work of Kebo Iwo, the builder of Gunung Kawi and Yeh Pulu. 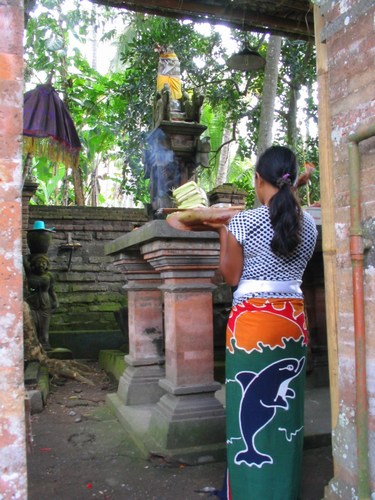