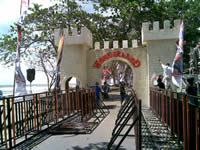 Today is New Years Eve, December 31st 2007. Bali is gearing up for its biggest party night of the year and we have good weather to add to the good vibes. Many red-faced tourists out and about in Legian / Seminyak, making up for the lack of sun over the last week.

Today an archway was being erected near the entrance of Double Six nightclub and Bacio. No doubt there will be a ton of people around tonight and Double Six will be heaven on Earth for many people.

Here is another look at some of the events going on in Bali for New Years eve 2008.

One Night in Tokyo
DJ Kotarou (JPN), live band by She & Judika, From 11pm