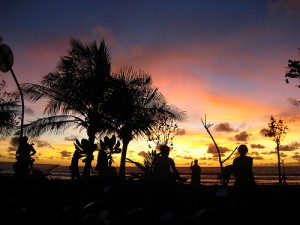 Indonesia has a very strong religious and cultural background and serious rules regarding pornography — so it should come as no surprise that there are really no beaches that are publicly marked as “nude beaches”, even though topless beaches are not only abundant but also popular in tourist areas. The local reaction can vary, much like nudity in the United States. It may be considered against the law, legally or religiously and any time you do this, you are pushing your luck. You might have some luck on the Western or Eastern ends of the country.

That said, there are a couple of beaches that are unofficially known as “nudist beaches” and some of the best ones are in Bali themselves — often they will not pester topless women at all at these beaches — as many tourists from Europe, Australia and America that come there, they know “where the money comes from” and will not arrest anyone going topless. However, the locals will generally not do this.

Kuta Beach
This one is the most well known. Kuta is a beautiful crescent-shaped beach that is only about a ten minute drive from the airport. It is very well known for it’s surfing and with the lack of coral reefs in this area, it’s a pristine setting for beginners and advanced surfers alike. Many people say the scenery at Kuta Beach is the best in the world. Many 3 and 4 star restaurants are close to that beach, it’s also a shopping mecca and home to the night life of Bali.

Uluwatu Beach
Although there are no “public nude beaches” in Bali, Uluwatu beach is nicely situated in such a place on the side of a cliff that many public viewers would not have access to this beach. Viewing a sunset on Uluwatu Beach is one of the most beautiful sights in the world, and there are many local cafes in the area. Uluwatu is a very lovely white sand beach.

Most of the other beaches
Geger Beach, Dreamland Beach, etc. were nudist beach secrets for some time. Geger is more well known because it’s five minutes from the largest golf resorts, called Nusa Dua. Recently, Dreamland Beach got a makeover and is now called “New Kuta Beach” in an effort to get more tourism revenue.

There are only three known places where nudity in public is accepted wholeheartedly. One is reserved exclusively for gay males, while the other two accommodate all lifestyles.

The biggest and well known is called Bali Au Naturel. Although this resort was created by a gay male who wanted to be able to enjoy the nudist lifestyle. However, this is not limited to gay people — all types are welcome, including straight, gay, lesbian and bisexuals. This is located roughly two and a half hours away from Densapar — the other one that is open is roughly 20 minutes away from Kuta — it’s a beautiful private area called Viceroy Bali. This place is home to a great waterfall that any nudist should frolic in at least once in their lifetime — there are seven Villas, each featuring it’s own garden and large swimming pool, perfect for anyone who wants to do a great skinny dip in the middle of the night. It’s best to observe this as a couple, because all the amenities of Indonesia would be found there — the finest spas, gardens and treatments can be found there.

If gay-friendly is more your speed, you might consider Laki Umi Villa, which is near Densapar. This place, although nice, seems to only accept gay males and will not be suitable for anyone looking for that special girl or anywhere to take that family.

In conclusion, the best places to go if you are a nudist and want to be in Bali would be the Villas and Resorts. Always check with the tour guides and make sure that you do not end up in trouble with the law.