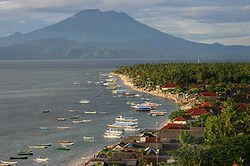 We are almost halfway through this year and across Indonesia it is Visit Indonesia Year 2008 and every province has some manner of activity planned as well as the normal yearly festivals. It is an exciting year for the government because it gives them the chance to showcase the beautiful archipelago, its people and culture. Although predominately the tourism input is to the island of Bali, it is the other islands that you will find interesting and, they are all reached easily by local air carriers such as Garuda Indonesia, Mandala Air, Lion Air and many more. So, if you are in Bali and want to experience a different culture or just want a couple of days in another part of Bali, do so because you won’t regret it. You can easily arrive in the cultural heart of Indonesia, Yogyakarta, with a two hour flight, see the sights and then return the next day or day after. A half-hour flight will see you arriving on the island of Lombok if you wish to see West Nusa Tenggara, and there are connecting flights to the other islands in this chain.

Here’s an article about Visit Indonesia Year I was reading the other day:

What do the Balinese do with deceased royals? How can you see a flower show without splashing out for a flight to Pasadena, California? Where can you test your athletic endurance in a triathlon?

Indonesia provides the answers to all these questions during this year’s Visit Indonesia program, according to Sapta Nirwandar, marketing director at the Culture and Tourism Ministry.

In Bali, Hindus cremate the deceased in a detailed ritual, called the Ngaben. This year the ritual will include royal members for the first time since 1979.

For flowers, visitors can go to the city of Tomohon in North Sulawesi.

“We will hold the Tomohon Flower Festival in June. If we keep pushing, it is possible that it will become a big flower festival, perhaps like the one in Pasadena,” Sapta said.

Bintan Island in Riau province, meanwhile, on top of its beaches and resorts, will host a triathlon this year, in addition to regular golf competitions.

And, according to Sapta, these represent just the tip of the iceberg when it comes to the special events planned for Visit Indonesia Year 2008.

Batam Island, for example, will host a vegetarian food festival in June that is expected to draw visitors from nearby Singapore.
The government, Sapta said, is using any and all promotional means to make Visit Indonesia Year a success.

The hit movie Ayat-Ayat Cinta, for example, has been used to market Indonesia to Muslims in neighboring Malaysia and Brunei Darussalam.

Special packages are being planned where anyone buying a certain amount of Indonesian coffee in Beijing during the Olympics will get discounts on trips here.

Bill Gates, the chairman of Microsoft and one of the richest people in the world, during his visit to Jakarta last week became an instant tourism promoter, mentioning the Visit Indonesia campaign in a speech while wearing a promotional pin on his shirt.

The government also sees the Visit Indonesia Year program as a trigger to get regional stakeholders more involved in promoting their tourism offerings.

“We want to get the regions to start their own tourism efforts and improve their infrastructure for tourism,” Sapta said.

Provinces like Riau, South Sumatra and North Sulawesi have already started their own campaigns. Jambi, Lampung and South Kalimantan are expected to follow next year.

The government has set a target of attracting 7 million visitors this year, which would be a 1.5 million increase from 2007. In the first quarter, it has seen an increase of 15 percent in tourist arrivals.

The World Economic Forum said in a March report that Indonesia failed to provide good transportation infrastructure and international-standard hygiene and sanitation systems, deterring tourists from the country.