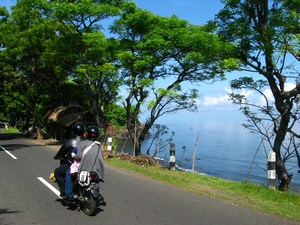 Waking to a glorious sunrise bursting over the ocean is one of those special moments and although reluctant to move on towards Singaraja along the north-east road, it was the adventurous side that took over and it was not long before we found ourselves driving along the road out of Tembok bathed in glorious sunshine and with some stunning mountain views on our left, and, the vast still sea to our right spread out like a rich blue carpet. The ride was a tad rough and having to avoid the potholes in the road and the trucks was no mean feat, however, once past Bondalem we found the smooth bitumen highway much more to our liking, well, at least out butts did!. What impressed me about this stretch of road were the surprising panoramas with each bend we engaged. Rocky outcrops jutted out into the sea, small bays where fishermen trolled for a meal and the constant brilliance of the never ending sea stretching to the horizon dotted with prahu’s coming into shore after a night’s fishing. 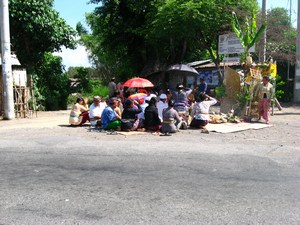 The scenery around the area is beautiful with patched ricefields and really anything else you would expect to find in Bali except the peace and isolation, the former could be a bit suss as the road is heavily used by trucks. What I really liked besides the bays which are ideal for snorkelling with the crystal clear waters are the villages. Each one we passed through the friendly locals weren’t shy of giving you a wave and shouting hello. I mentioned to my wife Candika that I would like to check out a few of the traditional markets (pasar adat) but one village we came to, we unfortunately missed. We passed by several folk in ceremonial dress and I was hoping that I would see the odalan at Pura Ponjok Batu but again I was to be disappointed. Turning into the small dirt area near the temple we were told it was a closed ceremony. This has happened before on my travels and all one can do is respect the cultural and religious laws of the island and return another day. There were several people praying nearby as we drove off and although curious as to why they didn’t pray in the temple I never did find out.

There are so many interesting stop-offs on this stretch of road and one of them is Air Sanih (Yeh Sanih). I wasn’t that effused about stopping there as I was more eager to visit Pura Beji further along the coast, but I had no choice. Air Sanih is a delightful spot to visit though as it is a coastal attraction and has a tranquil black sand beach as apposed to the pebble beaches further south. Swimming and snorkelling here is excellent as it is the place where the natural swimming pools are located and are fed by natural underground springs believed that the water comes from Lake Batur, and there’s a temple by the pool dedicated to Lord Vishnu. Nearby is a botanical garden that is worth a look. 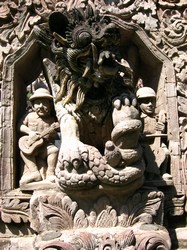 Further down the road is the larger town of Kubutambahan that really doesn’t have that much to offer the traveller unless you were hungry or thirsty. Instead we headed on to the town of Sangsit. During the tourist boom-time of the 80’s and 90’s the north-east coast road was on the tourist track and many visitors used to stop and have a look at the Subak temple of Pura Beji. This magnificent temple was built around the 15th Century and being a subak temple it is dedicated to the Goddess Dewi Sri (the goddess of rice in the Balinese Hindu religion). The front wall of the temple shows rewards that await the godly in heaven and the punishments awaiting the evil in hell. It is a perfect example of the rococo style of temple carving with animals, plants, and monsters motives and interspersed with demon heads. It is the off-angel symmetry of some of the gateways that I found interesting. The massive inner courtyard is adorned with frangipani trees and neatly trimmed lawn, wooden statues and a stunning padmasana of the sun-god. As I was perusing the carvings around the temple I was stunned to find carved into the walls the images of what I perceived to be as Dutch soldiers playing musical instruments. Extremely bizarre I thought.

Across the road from Pura Beji is a small warung where satiated our thirst and contemplated the end of a two day trip. From here we drove on to the northern coastal city Singaraja. It is from here you can choose to continue further along to Lovina or take the road we took, up through the mountains and down to Danau Bratan. 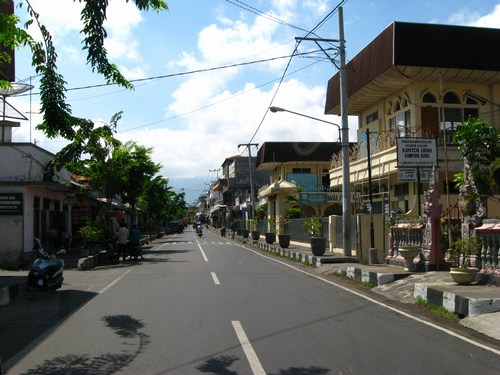