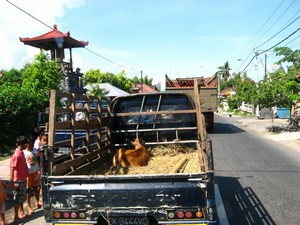 There are literally hundreds of day trips you could embark upon on your visit to Bali, but I have always found it best to get off the main tourist routes and do some exploring. Recently I spent a few days in the north-east of the island. It is a beautiful area of Bali and less frequented by tourists but no doubt in due time, this will change. Of the three main roads heading up to Kintamani we started off my using the road direct to the village of Kertabuana and by doing so avoiding the road tax payable on the main tourist route coming out at the T-Junction near Kintamani and, all the associated hassles. That in itself is a rip-off and should be banned, but, that is my personal opinion. If you wanted to enjoy a few nights around Gunung Batur then a trip down to the base of the crater lake is one that I would recommend. (Nick and I did this a few years back and stayed in Pekalongan. From here you can get over to Trunyan [for what it’s worth, at the moment] or just chill-out and relax, hiking.) 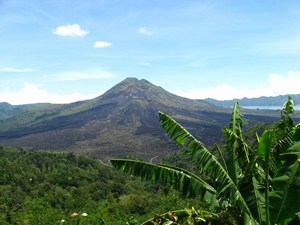 I was amazed when I arrived at Kintamani. It was practically deserted, void of tourist buses but, not of hawkers. They were still persistent and somewhat rude in their demeanour. One thing I was hanging out for was a nice cup of tea and so we went into one of the cliff-top restaurants that line the road. I won’t name the place but let’s just say the tea was insipid and overpriced. My travelling companions, however, partook in some food much to their regret later. What did impress me though was the spectacular view we were blessed with. In all my trips to Gunung Batur, this was the first time that I had seen the mountain with clarity and as far across as Gunung Besakih, the Mother Temple of Bali. I was eager to get to the coast and so onwards we went past the sacred temples of Pura Ulu Danau Batur and Pura Tegal Koripan and cruised along the Singaraja road until we got to the turnoff at the village of Dusa. By this time misty clouds descended giving the journey an eerie atmosphere. Very Hitchcock-ish and making it hard to see the road in front of me. 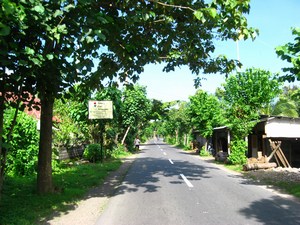 After a few crazy bends in the road the sea was espied and the destination in sight. Getting to the T-Junction at Bondalem was a delight and from here we had a choice as to where we wanted to stay overnight. Heading to the south will give you a variety of accommodation ranging from resorts to losmens and homestays. My choice was the Poinciana Resort even though previously I had never stayed there. This place I would highly recommend any traveller to stay at that can afford to splash out a few extra Rupiah. I paid Rp300,000 for my overnight stay, but this was pure luxury and included a sumptuous breakfast. As I mentioned before, there are cheaper places in the villages of Tembok, Tejakula and Kawanan. But for that night I just walked around the fishing villages contemplating the next day’s journey along the north-east coast to Singaraja.