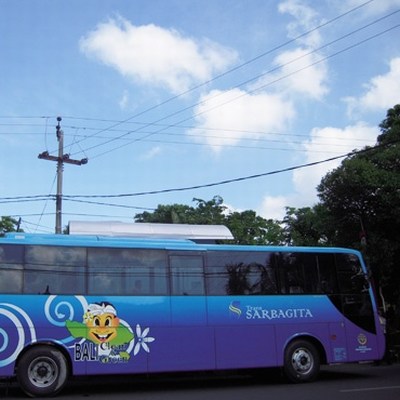 Most tourists tend to avoid the local bus system but in actual fact, the bemos are a cool way to get around the island. The budget-friendly bemo is Bali’s main public transportation and every town has a bemo or bus station. The capital of Bali, Denpasar is the hub of these unique forms of transport and it’s good to know that Gilimanuk, Singaraja, Amlapura and Gianyar have major regional terminals, so you can get from one corner of Bali to another.

Fares on shared bemos can be very cheap. If you want a taste of the traditional Balinese transport then it is the Bemo you want to experience. These are actually mini vans, but they are referred to locally as Bemos. In many parts of the island (except in the south where taxis have become more popular), the Bemos work as the bus service. Now in Bali there is a new addition to the system’

According to Beatmag, after only two weeks in operation, the new Trans Sarbagita Bus mass transportation system has already reportedly carried a total of 11,112 passengers – an average of 794 people per day. With a flat tariff of Rp 2,500 for students and Rp 3,000 for the public, Sarbagita has managed to generate Rp 33 million (based on public rate) since its inception. The overhead expenditure costs of gasoline and other operational considerations will be calculated within three days and compared to the gross profit so far.

Image Courtesy: Bali and Beyond