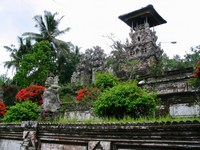 Most tourists that come to Bali, more often than not, have a temple or two on their itinerary. There are the regular heavily-visited temples such as Pura Besakih, Pura Luhur Ulu Watu and the garden temple of Pura Taman Ayun. There are also several other beautiful and less visited temples on the island that are just as fascinating. The garden temples, in my opinion, are by far the greatest of all to visit. One such garden temple on the outskirts north of the town of Bangli in East Bali is Pura Kehen. When you first visit this grandeur structure it is almost mind-boggling because the temple rises steeply from the edge of the road at the foot of a hill and quite imposing with the multitude of steps leading up to the candi bentar or split gateway that is the entrance. Actually there are two entrances but visitors can only use one of them. Founded in the 11th Century by Sri Brahma Kemuti Ketu, Pura Kehen is the second largest temple on Bali and the most sacred in the region. 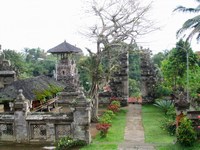 There are three parts to this magnificent temple and seem to be stacked one on top of another with stairways leading to each section. The old part of the temple is based at the first level and it is here where you will see the historical lontar and prastasis. There is a striking closed gateway called pamedal agung and you will see the carved demons of kala-makara whose job is to scare away malevolent spirits from entering the sacred grounds. The first shady courtyard has an old waringan tree and it is here you will see the kuklul drum tower perched it its boughs. What amazed me was that around the walls of the courtyard are Chinese porcelain plates, albeit chipped, inserted in them. The jeroan, or inner sanctuary, has a shrine with 11 tapering meru roofs. These are the resting places for the mountain Gods. The padmasana (the three-throned shrine to the Hindu trinity) is situated to the right and is a perfect example of Balinese stone carving. In fact, every where you look there are magnificent stone carvings that personify a Balinese temple.

The highest part of the temple affords spectacular views over the countryside below and it is here that you can see the grandeur of the whole temple structure. It is also the most peaceful. Pura Kehen is adorned with colourful gardens of hibiscus and lantana amongst a few. The best time to visit Pura Kehen I have found is late afternoon when the tourist buses have gone and this ay you can relax and enjoy the temple without being hassled by tourists clambering everywhere. Late afternoon is the best time for photography as the light is perfect. There is a small entrance fee, and if you are thirsty then there are small warungs opposite the temple. 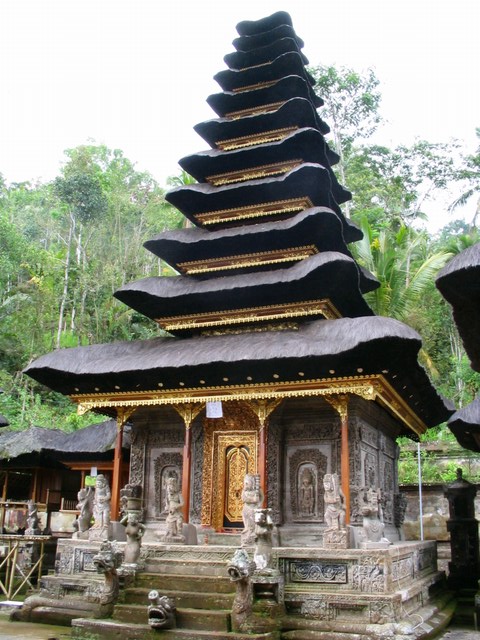