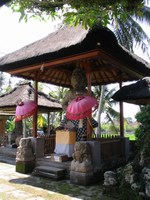 On the road north from Bedulu towards Tampaksaring you will pass by the Museum Purbakala (worth a visit) on the right-hand side. On the left-hand side not far from there you will see the ‘Mad Buffalo Temple’ or Pura Kebo Edan. Very little is known of this temple. However, Archaeologists have approximately dated the large statue, ‘The Pejeng Giant’, as 700 years old. Urs Ramsayer wrote in his book ‘The Art and Culture of Bali’ that Pura Kebo Edan was most probably a Balinese version of the East Javanese Singosari magic temples. Interestingly these temples were built in the 12th C in Java. Containing some of the oldest statuary in Bali, one amazing and awesome example is that of a giant 3.60-meter tall figure. Quite startling is his huge phallus pierced with four pins, said to increase a woman’s sexual pleasure. Another rather unusual statue is that of a fat, crouching demon. This figure holds an inverted skull to his chest while in his curly hair is an ornament of tiny skulls. 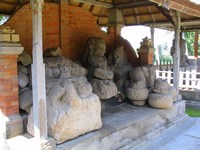 The temple is small in comparison to other temples in this region. The most significant part of this temple is a huge wooden shelter. It stands out in its height and that’s because it houses the four metre giant statue of the Pejeng Giant. This interesting statue has snakes seemingly curling around its ankles and wrists. The most prominent feature of the statue is its well-endowed and realistic penis. There is a lot of debate regarding whether or not this ‘giant’ is actually a demon or a God. It is said that it could be a Bima (a warrior-lover). However, its dating is around the 13th or 14th C, and again, there is debate as to its influent creation. Some Archaeologists state that it was either by Shivaite or Tantric Bhuddist cults or factions. Interestingly, the giant is flanked by two ‘raksasa’ (Hindu mythical giants) threateningly decorated with skulls.

The legend behind this pura is fascinating. The Giant or Bima had immense desires for a woman. However, his rather large penis was too large for her and subsequently the woman took another lover. Bima, at one point in time, found the couple copulating and immediately set out to stomp them to death out of anger. 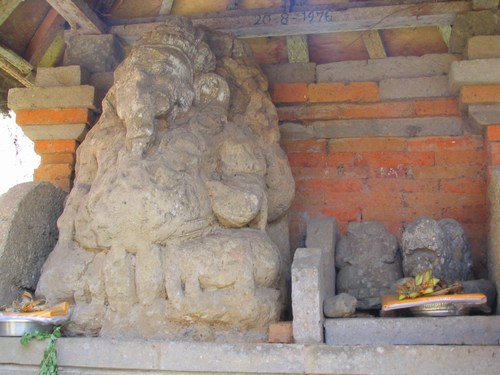 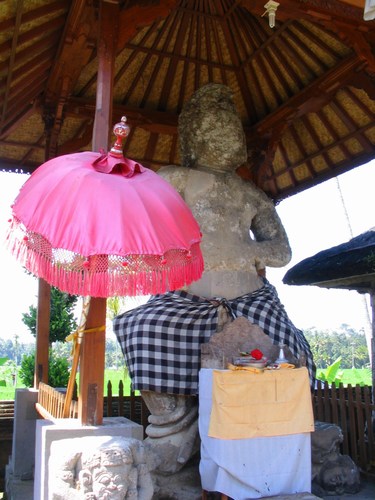