Tears at a Funeral 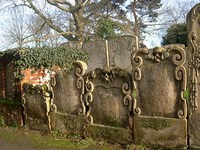 The other day I attended a funeral of a dear friend of the family and I was happy, celebrating in the life of the deceased person and what she had ahead of her. As a practising Bhuddist this was the norm for me. But, as it was a western funeral there were tears flowing, men sobbing and the general ambience of the place, depressing. I have been to many funerals around the world and all in varying cultures, but it was this western culture with its sadness in death that blew me out. Sure, the person they loved for so many years had departed the planet but they should have been happy for this person and being celebratory in their attitude to death. There then I suppose is the difference between ancient cultures and that of the western culture with regards to death and burials.

The Balinese cremation is always one of happiness and because their religion is based upon respect for and worship of God and ancestors, the Balinese believe that death itself is not the end of all matters but instead a new beginning. They celebrate in death and it’s a joyous time. With a cremation ritual the body is dissolved and returned to its original elements. The Balinese believe they must free the soul for its journey into the next life, or existence. It’s an amazing series of events and one as an outsider should witness at least once on their visits to Bali. It is believed that failure to free the soul (roh) will result in the soul becoming a ghost causing havoc amongst the village and that the Balinese fear. It is believed that the soul cannot be freed as long as there is a body thus the destroying of the corpse by the elements of water, fire and earth is essential.

If you do have the opportunity to witness a cremation then be respectful and don’t get in the way of proceedings. Behave respectfully and discreetly take your photos. To show that you have respect for the family and the rite of passage, wear a white sash around your waist.