Supardi and the Kerupuk Business 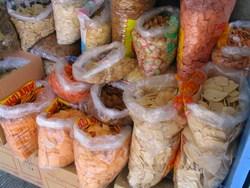 It is an irrefutable fact that Indonesians love their kerupuk — just ask Supardi, the owner of a successful kerupuk business. Kerupuk – crunchy fried or baked crackers made from flour – are everybody’s favorite snack and can be found at most sidewalk food stalls. Supardi, 55, is not an economist or a business analyst. He did not graduate from elementary school and he struggles to read and write well; he asks his son Mulyandi, the third of four of his children who is studying economics at a private university, for help with any written documents. Supardi, who was born to a farming family in Gemulung, Sragen regency, Central Java, became an orphan at the age of eight after both his parents died from an unknown illness; due to economic hardship, they could not afford medical treatment. Following the death of his parents, Supardi stayed with a relative. But his relative was also poor and Supardi was forced to drop out of school.

“When I first started my kerupuk business, I knew that one day crackers could become expensive snacks as people from all walks of life, from both the middle-upper income group and the lower income group, like them,” Supardi said.

In order to support himself, Supardi collected grass to feed cattle. He did not receive a monthly salary, but every year he would be given a goat, which he would sell to cover the living expenses with his relative. He spent his childhood working everyday from early in the morning until the afternoon, with no time to play with friends according to Indra Harsaputra.

“When I worked, I often daydreamed of becoming a rich man. I daydreamed so much, that I once sliced my finger while cutting grass,” he recalled, pointing to a blackened scar on his finger.

He spent year after year working under the scorching sun doing the same job until he was 17, at which point he decided to try his luck and look for work in the city. With little money and only one set of clothes, he left for Surabaya.

He applied for jobs in factories but no one would hire him. “I almost gave up because I had no money left. I didn’t even have any relatives in Surabaya. But I had to be optimistic that I would not be a vagrant without a place to live,” he said.

One of his friends in the city offered him a job — making and selling kerupuk. His friend also provided him with the initial capital; at that time one cracker cost Rp 1 (less than US 1cent).

Supardi carried a basketful of kerupuk for more than 40 kilometers every day to sell his product. He found customers, one by one, and managed to make some money to pay back his friend.

With the profits, he was able to purchase a bike that allowed him to travel even further and find more customers. A few years later, he managed to buy a motorcycle.

Supardi now owns the biggest kerupuk business in Surabaya, with 80 workers and a daily turnover of more than Rp 10 million.

Recently, when the price of cooking oil rocketed from Rp 9,000 to Rp 14,000 per liter, Supardi and some 60 other kerupuk business owners were faced with a dilemma. Supardi, and others in the kerupuk industry, were forced to increase the price of their kerupuk from Rp 200 to Rp 250 per piece.

As a result, kerupuk sales declined as traders did not want to buy them, saying they would be difficult to sell at the increased price. As a result, a large stock of kerupuk remained in Supardi’s warehouse and he lost more than Rp 5 million.

“That was a difficult choice, I was determined to produce kerupuk to serve to my customers, but they refused to buy them because of the price rise,” he said.

After suffering this loss, Supardi decided to make smaller-sized kerupuk and dropped the price back to Rp 200 per piece.

“I never thought too much about profits. What’s important for me is that my consumers would not miss out on getting their kerupuk. I would suffer more if my customers were disappointed.”

Luckily, his strategy worked; his customers did not mind the smaller kerupuk, as long as the price remained the same.

Price increases and trying times in running his kerupuk business are not new to Supardi. The price of kerupuk, he said, had gradually increased from Rp 1 a piece since the early 1970s due to the ever-increasing cost of materials like flour, kerosene and cooking oil.

In 2004, when the price of kerosene increased, Supardi simply replaced the fuel with firewood.

“What creates a headache is when the price of cooking oil increases because it is impossible to find materials to replace cooking oil,” he said.

Supardi said he had tried to replace cooking oil with sand — a method use by other kerupuk producers — but found it was ineffective as it changed the tasted and quality of his kerupuk.

Despite the increasing price of cooking oil, Supardi remains optimist that Indonesians’ perpetual love for kerupuk will guarantee a bright future for his business.