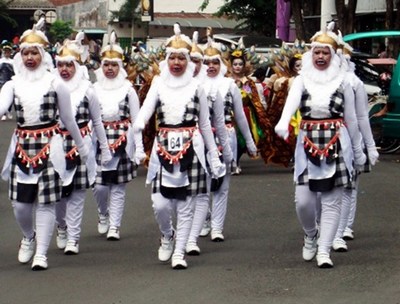 If you travel throughout the archipelago of Indonesia you will find that in the major cities there are often street marches. These come with the bands, finery and all the razzamatazz associated with a good parade. Locals flock to the side of the roads to see the various groups parade past in all their colour and pageantry.

On September 6th Bali will be having a street parade to commemorate the 105th anniversary of the Badung Puputan according to an article I read today. For those not familiar with Puputan, between 1894 and 1908, hundreds of Balinese, led by their kings in Bali and Lombok, died in the face of advancing Dutch colonial forces.

According to the article, Marching units comprised of male and female groups of marchers drawn from the Armed Forces, youth organizations, university students, civil defense units, public servants, private sector employees, and high schools student are welcome to form marching teams to compete. A total of Rp. 375 million (US$8,88) in prizes will be awarded together with ceremonial sword trophies (“Keris Puputan”) to the best male and female marching units.

Where to see the March: It will start on September 6th at Candi Margarana in Tabanan and finishes at the Lapangan Badung in Denpaar.