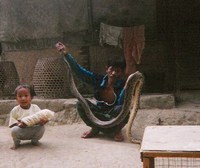 I have often been asked the question by first-timers to Bali as to the prevalence of things that slither and bite, crawl and bite, or even look downright ferocious. Great news – there are snakes in Bali and only a few of the species are poisonous, in fact about six species. That’s not many compared to Australia or other parts of the world. You will often see on your travels some of the locals offering to let you have a photo taken with their pet 20 foot Python or allow you to play with their pet hairy spider that just happens to be the size of a dinner plate whilst some grinning local snaps away with a polaroid camera. Staying calm in these kind of situations for the normal person is somewhat impossible and generally entails a shriek or a loud scream from the holder of the said animal and of course invoking all manner of laughter from the locals. In general these ‘pets’ are pretty cool and are used to being manhandled and mauled by some freaked-out tourist. But, what will you do if confronted out in the countryside by an inconsiderate snake (according to you) that has crossed your path?.

First thing you don’t do is pick up the largest tree branch available and clout it as hard as you can. Practically all snakes will avoid the intrusion of humans into their territory and in the norm move away from you. It is best to just let the snake ‘do his thing’ and move on.

Don’t think it will be great fun to scare the shit out of your fellow travellers by picking the snake up and tossing it at them or their feet. Snakes bite – poisonous or not – and if you don’t fall-off-the-perch before you reach the nearest medical attention, you will be left with a very messy and seeping wound for quite a while. I know because I accidentally put my hand on a very thin green snake in the mountains of Java several years ago and was bit. It took forever [or seemed like it] for the area around the bite wound to heal.

If you see a snake on your travels then give it a wide berth and it will generally disappear from view and leave you well alone. They don’t want trouble from interfering humans and you certainly don’t want to get bit.