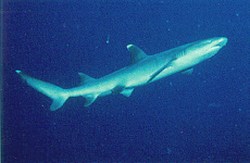 For as long as I can remember on my travels I have never imbibed in seafood cuisine that contained shark meat of any kind. As a scuba diver and an environmentalist, I do have a very healthy respect for these beautiful creatures. There are those that don’t considering them the scourge of the oceans. This is not to say that I haven’t had my fair amount of run-ins with them and on one particular occasion, it was almost a fatal meeting with a large Tiger Shark. Even after that I still harbor a healthy respect for them. It irks me when I read in the newspapers about fishermen who catch sharks only to slice off the fin and toss the living carcass back into the ocean. According to environmentalists there is a booming demand for shark fin soup and, is threatening the existence of several species. As much as I respect other people’s rights to eat produce made from shark meat, I myself cannot palette it. If shark fin soup or other shark cuisine is to your liking then you will be pleased to know of a warung in Jimbaran Bay not far from the entrance to Udayana University called Pak Item. Apparently it does a good trade, but not from me.