Security Measures in Place at the Airport and Sea Gateways 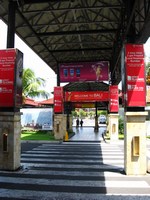 I have to admit then when I saw the headline of this article Coming to Bali, Bring Your ID Card, I thought to myself not more rules just to get into Bali. It’s bad enough having to pay excessive airline fees and airport charges, and, visa fees. Fortunately, when I continued reading the article it had nothing to do with westerners visiting the island. Whew! With the upcoming mass invasion of domestic tourists arriving on the island in the next week to holiday there because of the Idul Fitri celebrations and kids holidays it is only natural that officials are eager not to allow those people with another agenda on their minds entering the island. Without writing it you all know what I mean. October is not a good month for a lot of people who lost a loved one due to certain tragic events on Bali. Anyway, it’s good to see that the gateways into Bali are being covered efficiently. As the article in the Bali Discovery mentions, Tough security measures are now in place at all entry points to Bali including supplementary personnel from the police and armed forces, transportation department officials, medical teams and local community security teams.

The idea of having an I.D. Card is quite a good one and is mandatory if you are an Indonesian citizen. For westerners, I think it’s a fabulous idea and especially if you travel a lot. The idea of I.D. Cards has ruffled a few feathers when it brought to the attention of the public by the government in Australia, England and a few other western countries. It is often regarded as an invasion of privacy. Yes, it could be seen this way but as I mentioned, if you travel a lot then it could make for an easier life when dealing with the various government departments in other countries you are visiting. Of course you have a passport to prove who you are but if you had an accident and didn’t have your passport with you, having an I.D. Card with all your info, blood type and allergies printed on the card would be ideal because then there would be no mistakes made at the hospital you are being treated at. This is only one scenario. I used to have an I.D. Card that I had specially made and if you are interested in getting one, then check out this site.