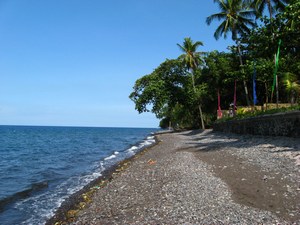 It always pleases my heart to see that villagers are participating in caring for the environment, whether it’s on land or in the sea. And, it seems just this is happening in Bondalem in north-east Bali. Recently I was looking around the area of Tejakula not far from Bondalem. Actually I was a guest at the Poinciana Resort in Tembok, along the same stretch of road. This whole area is pristine and well worth a visit albeit off the regular tourist tracks. The pebblestone beaches are a challenge underfoot but this is outweighed with the stunning backdrop of the mountains bowing to the sea and the crystal clear waters of the Bali Sea. It is an area where it is understandable that the friendly villagers have this desire to preserve their surroundings. Basically they make a living from the sea and so it’s only natural that you would want to preserve the waters and the coral reefs.

Residents of Bondalem village in Buleleng regency, Bali, on Tuesday officially launched a 3 square kilometer sea conservation area and reef monitoring center that will be used as a center for education and information on coral reef ecosystems.

The signing of a stone plaque by Buleleng Regent Putu Bagiada and the presentation of 40 blocks of coral from the head of the local maritime and fisheries agency to the Bondalem village head marked the launch.

“We started to initiate the conservation area in 2006 with help from the Reef Check Foundation,” Bondalem village head Gede Ngurah Sadu Adnyana said in Buleleng.

He said coral reefs in the region had suffered from the practice of fish bombing and other harmful fishing practices.

“Also, lots of residents made a living by taking coral and crushing it to make lime which they sold,” he said.

He said it was difficult to blame the residents for this because so many lived below the poverty line.

“As a consequence of these harmful practices, the amount of fish caught by our fishermen kept decreasing daily, so I issued a village decree in 2006 and ordered residents to start protecting the sea and coral,” he said.

Reef Check Foundation chairwoman Naneng Setiasih said the sea conservation area would be like a bank for coral to grow.

“We expect people will make use of the coral bank without laying their hands on the main deposit,” she said.

Head of the Bali Tourism Agency I Gede Nurjaya, in his speech during the launch ceremony, praised the residents of Bondalem for taking the initiative to protect the environment.

“This is a very smart move by Buleleng residents because, after the United Nations Framework Convention on Climate Change held in Bali last year, people are supposed to stop talking and start taking real action to overcome these issues,” he said.

“I’m proud of Buleleng residents who have responded to climate change issues with real action.

“At the end of the day this will help Bali tourism since the main attraction of tourism on the island is its environment and scenery,” he said.

He said Buleleng had several tourism potentials that could be developed: ecotourism, spiritual tourism and agro tourism.

He added that this step by the residents of Bondalem would help in developing the region’s ecotourism.

“This conservation effort should be continued even though we probably will not experience the results ourselves, but at least we can preserve nature for our children and grandchildren,” he said.
Buleleng Regent Putu Bagiada said he was pleased with the initiative by Bondalem village and expected other villages would follow its lead.

“Buleleng has at least 144 square kilometers of coastline, and we all need to cooperate in preserving it,” he said.