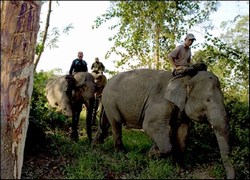 Indonesia currently has 16 or more species on the verge of extinction. A further 30 are classified as endangered. On the critically endangered and endangered lists are the Sumatran tiger, the Bali starling, the Javanese wild dog, the orangutans of Kalimantan and Sumatra, the Sumatran gibbon and the Sumatran elephant. Some claim the number of Sumatran elephants remaining in the wild is around 1,500, while the more conservative believe 1,000 is more likely. A further 900 or so are found in Sumatra’s elephant camps; once known as elephant training centers, the camps are now called elephant conservation centers and are designed to save the species. However, these camps have become death camps for far too many elephants, according to elephant conservationist Nigel Mason of the Elephant Safari Park in Taro, Bali.

“There is never a surviving (rescued) baby in the camps. They are not adequately provided with enough medicines, foods, milk … there is simply not enough funding going into the camps,” said Nigel, who from 2002 until 2005 attempted to transport a group of Sumatran elephants from Minas camp in Riau province to the elephant park in Bali.

The park is an eco-tourism center that aims to conserve the Sumatran elephant according to Trisha Sertori.

Changes in law thwarted a 2002 effort to transport and save the animals, which included two baby elephants orphaned when their parents fled farmers.

“The 2002 transfer went on hold until 2004. The baby elephants died within months of the failed transfer. We had left milk and medical supplies, but maybe workers took the milk home for their own families,” said Nigel of the hardship faced by the elephants and their human protectors in the underfunded camps.

He said since the successful transfer of ten elephants in 2005, the park has repeatedly offered to take abandoned baby elephants, raise them and return them to Sumatra for release or camp life.

“We have offered to take any babies, bring them here, raise them and send them back as adults. Never has one been sent,” said Nigel, who became involved in elephant conservation quite accidentally in 1997.

“An Australian guy came to my office and asked if I wanted to take on some elephants. This was something I had never given thought too. Elephants are not native to Bali, but I went out to Taro to have a look. There were nine adult elephants in the middle of a dried out paddy field. It was the most horrible environment for elephants I’d ever seen. I had to do something for these animals. That’s how the Elephant Safari Park was born,” said Nigel.

It is almost impossible to compare that dried paddy field of ten years ago with the lush new jungle of the park. More than US$1 million has been spent recreating a shaded jungle habitat needed by elephants.

Nigel said when he took on the nine elephants already in Bali, he knew he was taking on a workload that would continue for the rest of his life. But he said recreating a healthy environment was essential if the animals were to survive away from their Sumatran jungle home.

“This area was ideal. It’s mountainous and cooler than the coast. Elephants do not do well near the coast and in dry climates. They get cataracts and skin complaints and need to live in humid cool mountain areas. They don’t like the full sun and are happy in the jungle. We have tried to replicate that here.

“That’s why we chose this area, which is a long way off the tourist track, but we figured tourists need to come to the elephants’ habitat rather than moving elephants to the tourists,” said Nigel.

He added that any idea of establishing an elephant park in Sumatra, home of the elephants, was almost an impossibility given the costs involved.

“This is a business. We receive no funding. People would not go to Sumatra … it’s hard enough to do it here,” he said, adding the cost of housing and feeding 27 elephants around 250 kilograms of food each day meant the park needed to be run as a business.

And while business may at times seem to be a dirty word, Nigel points out that it is through business that the 27 elephants at the park live healthy and happy lives. So successful and happy are the elephants that one, Fatima, is pregnant.

“We have been trying to breed here for some time, but it is extremely difficult. But we have now managed to get one female pregnant. She is due in 2009 after a 22 month gestation period.”
Unlike many captive breeding programs, the Elephant Safari Park does not use artificial insemination (AI), allowing the elephants to breed naturally in a secluded area of the park, closed to tourists.

“We don’t use AI. We have a honeymoon area north of the park. When the male comes into musth (heat) he chooses his female and they are moved to the honeymoon area. It is a huge success for us that the elephants are breeding,” said Nigel.

In the future, the park aims to develop a full research area. A lab has already been built, according to Nigel, but hospital grade equipment — such as ultrasound machines — is expensive and so far out of the park’s financial reach.

“With the lab we can do blood and urine tests here, rather than sending them to Jakarta. With an ultrasound we can monitor a baby elephant’s development. We can have ongoing research done here.

“There is very little information on elephants in Indonesia at this time and I believe we can have far more success with our breeding program with good research. If there are any hospitals out there with an old ultrasound machine, we’d love it,” Nigel said.

With the rate of destruction of Sumatra’s remaining forests, and the ongoing battle for land between elephants and farmers on the island, there are grave fears that parks, such as the Elephant Safari Park at Taro may be the only places left with living Sumatran elephants and their precious DNA.

“When people look at Sumatra’s jungles, they believe there is still plenty of jungle for the elephants. But this is simply not true. There are isolated patches of jungle between palm oil plantations, farms and towns, but they are not linked and the areas are not adequate to sustain elephant populations.

“Even if there were corridors linking these jungles, there would still be battles between farmers and elephants. In a perfect world these animals would live wild in the jungle, but this is not a perfect world,” Nigel said.

“The alternative is that these elephants remain in the dusty, underfunded camps in Sumatra where too many are dying.”

He stressed the park did not own the elephants, saying they were on loan from the Indonesian government.

“We have an obligation to care for these animals for the rest of their lives.

“This is a really sensitive issue, but if things continue as they are, the Sumatran elephant will be extinct within 20 to 50 years,” said Nigel pointing out that around half of Sumatra’s remaining wild elephant population are in camps, where breeding is unlikely.

The other half that represent a breeding population are still in the wild and constantly at risk of death at the hands of farmers, or starvation as forests are lost.

It seems that only parks like the one at Taro are able to offer these animals salvation.

“I think the park is a good example of how business can care for the environment and build a stronger economy for the local people here,” said Nigel.

Most staff members at the park have been recruited directly form Taro village.

One elderly local said the park was a critical development for the area, offering many young people work.

“This is very important to our village and we are happy to have the elephant park here,” said the elderly Balinese man.

The park pays royalties to the village for allowing the elephants to be ridden through a community jungle.