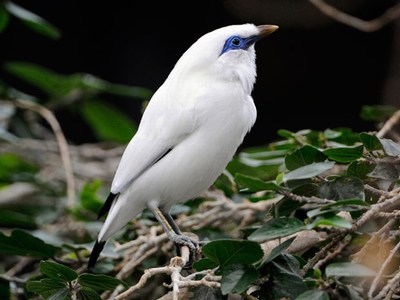 Elusive and just as beautiful, yet endangered, the Bali Starling has been on the WWF list of endangered species for quite some time. The remaining wild population of this bird are to be found only in Bali and only in Bali Barat National Park. This stunning bird, known to the locals as Curik Bali, is an ornithological delight to see and the dream of many birdwatchers, or tweeters as they are known.

You would know if you saw one. The Bali Starling, often referred to as the Bali Mynah bird, has a white body, a long drooping crest with black tips on its wings and tail. The most distinguishing mark of this species is the blue markings around the eye and the yellow bill.

I was pleased to read in an article of the recent release into the wild of these endangered birds. It is hoped the species will procreate and thus strengthen the numbers in Bali Barat National park. Although only two birds were released, it is a start. Getting to see one of these magnificent birds might be harder than you think because a trek through the jungles of Bali Barat National Park is a must.

As the article explains: Wildlife officials estimate the population of Bali Starlings living in the wilds of the West Bali National Park at 37 birds with another 147 captive breeding birds also maintained at the park.

Bali is a haven for bird lovers and there are many species to be seen on your travels. I particularly like the herons of Petulu in Ubud. When on your travels in Bali it is a good idea to carry a compact pair of binoculars. Heck, I do! You just never know what you’ll see.