Places to Visit in Northern Bali 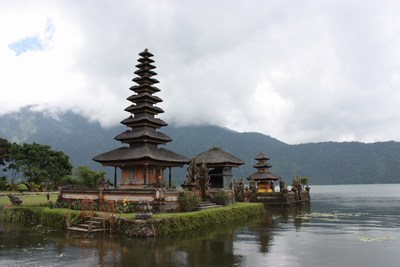 Although Bali is a small island there is still so much to see and do, and, it will take more than one trip to the island to cover most of the attractions. The northern part of Bali is a good starting place and heading in that direction from Kuta a lot can be seen and done. You can immerse yourself in Balinese culture, see stunning temples and spectacular scenery that will take your breath away.

The far north of Bali has so much to offer the traveller in terms of things to see and do, great accommodation and, a coastline that will astound any traveller who appreciates the beauty of nature. Of course the focal point is Singaraja with its Dutch colonial architecture and wide streets, but, taking the road left or right out of the city affords many delightful surprises. However, do take time out to explore the former capital of Bali because you will not regret it.

Pura Ulun Danau Bratan: Located 2 hours north of Kuta on the shores of Lake Bratan. The temple is one of Bali’s kayangan jagat or directional temples and protects Bali from evil spirits but for the visiting tourist or traveller, it is a surreal and pleasant place.

The temple on the shore, Pura Teratai Bang has its own 7-tier meru dedicated to Brahma, the Creator. You will often see Balinese worshipers inside this temple, taking blessings and praying. Being such a sacred place, you are asked to stay outside the inner courtyard, but it is possible to look over the wall and get good photos.
There is also a traditional market place in the carpark selling the norm but, there is a plethora of fresh fruit on sale as well that is the best to buy whenever you visit this place.

Without a doubt this is one of the most stunningly beautiful attractions Bali has to offer visitors. The Botanical Gardens are located on the slopes of Gunung Pohon, or Tree Mountain giving it a surreal atmosphere. Although only a square kilometre in area I estimate you would need three days to explore this Botanist’s utopia. Originally built in 1959 the Bali Botanical Gardens has over 800 different species of trees from around the world. Also, there are over 400 species of Orchids to be found and many in full bloom.

Lake Buyan and Lake Tamblingan: After visiting Danau Bratan, take a drive north to the Munduk turnoff and then head to that town. Just pass the turn-off the first delight you will encounter is Lake Buyan (the lake is located around 55 km north of Denpasar). Further on is Lake Tamblingan. These two lakes are two of the four lakes on the island of Bali which have become tourist attractions. There are areas along the Munduk road where small parking places enable you to view both the lakes. Of the two lakes, Lake Buyan is the bigger with an area of some 4.93 sq km wide.

Gitgit: The most visited waterfall in Bali, these waterfalls are located around 10 kilometres south of Singaraja and a two and a half hour drive from Kuta. Gitgit is easy to find as it is well sign-posted and popular due to its location on the main road. The hardest thing about seeing this waterfall is the 500 metres of steps going down to the falls.

Singaraja: There is so much to see and experience in this city. Here are a few places:

Gedong Kirtya Museum and Library:
This is the only library in the world with a large collection of lontar manuscripts both ancient and sacred texts on leaves of the lontar palm. The building also houses books from the Dutch colonial era and some very interesting inscribed copper plates called prasasti. Not far from the Library is the museum which houses the collection of the last Raja of Buleleng.

Ling Gwan Kiong Chinese Temple:
Just off Jalan Erlangga and a stones throw from the ocean sits the beautiful Chinese temple Ling Gwan Kiong. A colourful and beautifully constructed klenteng, access to the temple is via a water bridge over a pond filled with pink and white lotus flowers. Bhudda statues and ornately decorated textiles are to be found everywhere. Particularly impressive are the murals of Deities hand-painted on the entrance doors and surrounding walls.

The Waterfront Harbour:
It is a quite place and there are some deserted and old Dutch warehouses to be found here but they are rundown but one can imagine the hive of activity that once occurred there. Take a stroll along the beach and have a look at some of the scattered traditional villages along this stretch. There is also a monument called Yudha Mandala Tama that was erected in 1987 and commemorates the independence struggle against the Dutch in the 1940’s.

Singaraja Central Market:
Located right in the centre of the city on the main street, this poky and dusty market is fabulous to meander through albeit a tad claustrophobiatic at times. The market is seldom visited by westerners so be aware of pilfering but it is a place where you an also get some great shopping and cheaper than in Kuta!. It is a general goods market meaning it has just about everything.

Lovina: Essentially consists of six traditional villages on a ten kilometre stretch of the main road which hugs the north coast – Temukus, Kalibukbuk, Anturan, Pemaron, Tukad Mungga and Kaliasem. It is a quiet area of Bali although it can get busy in July and August. The narrow black sand beaches are generally safe for swimming. At one time it was a popular tourist destination before the bombings, and now, there is a steady stream of tourists. There are an array of accommodation and a plethora of warungs and restaurants to choose from.

Dolphin Sighting:
Trips leave each morning and have very mixed reviews as the boats tend to outnumber the dolphins, but it can still be an enjoyable ride. June, July or August are the best time when the weather is good and the waters blue and clear. There are some 300 dolphins in the area. Prices are fixed.

Pengastulan: Like most towns in Bali, the prominent wide tree-lined streets of Pengastulan are a pleasure to drive down, and, the usual array of shops and warungs are scattered here and there. Pengastulan is truly a great place to stopover on your way to Lovina in the east, or, to take the north coastal road to Gilamanuk. The great attraction near the town has to be the Vihara.

Brahma Vihara Arama: Located SW of Lovina, 3 km inland from the town of Dencarik. Built in 1970, Brahma Vihara Arama is popular with Buddhist visitors form all over Asia and is a unique place. The location on the northern slope of the mountains, affords wonderful view of the north coast.
Brahma Vihara Arama has elements of Balinese Hinduism which include a couple of terrifying naga either side of the entrance and a Balinese Hindu kulkul (wooden bell) tower. The bell shaped structures, made of blocks of dark stone remind me of Borobudur in Central Java.

Air Sanih: Located 17 km from Singaraja. The springs are surrounded by garden and there are changing facilities and the water is ice-cold freshwater spring. Since 1930, Air Sanih has been well known as a tourist attraction for locals. People believe that the water comes from Lake Batur. You will also find a temple by the pool dedicated to Lord Vishnu. The small tourist scene that is set up here also attracts locals who love a late afternoon soak in the springs. Can be a good way to relax and check out the local scene also.

Pura Beji: This magnificent temple was built around the 15th Century and being a subak temple it is dedicated to the Goddess Dewi Sri (the goddess of rice in the Balinese Hindu religion). The front wall of the temple shows rewards that await the godly in heaven and the punishments awaiting the evil in hell. It is a perfect example of the rococo style of temple carving with animals, plants, and monsters motives and interspersed with demon heads.

It is the off-angel symmetry of some of the gateways that is interesting. The massive inner courtyard is adorned with frangipani trees and neatly trimmed lawn, wooden statues and a stunning padmasana of the sun-god. You will find carved into the walls the images of what is perceived to be Dutch soldiers playing musical instruments. Extremely bizarre.