In Search of Prasasti Blanjong 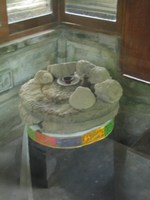 I had heard about it from Balinese friends, read up about it, and finally, went in search of it. The stone pillar of Prasasti Blanjong is one of the oldest man-made objects in Bali dating back to 913AD, and it is the written language on the pillar that I was most keen to observe even though I knew I wouldn’t understand it. After reasonable research I was able to find out the language used on the pillar is most likely old Javanese (kawi), and it tells the story of a king who came from Java, in order to set up a Mahayana Buddhist government. The site of the temple and small shrine in which you will find this archaeological treasure is located on Jl. Danau Poso in Sanur down a small gang virtually across the road from a Circle K. I had anticipated a magnificent piece of circular stone carefully guarded but this was not the case. When I reached the temple there only one woman was deep in prayer and after negotiating a few steps, I found a small room at the rear of the temple where glass enclosed stone pillar sat. The middle section of the pillar is wrapped in cloth, but I could not see extracts of the worn inscriptions. An elderly Balinese man approached me and explained the glass casing was built in the 60’s as a form of preservation of the two metre tall stone pillar. I must admit I was a tad disappointed but also thrilled that I could view such an ancient treasure of Bali. If you are going to see Prasasti Blanjong, entrance is free but please wear a sarong and sash out of respect.