Gunung Agung to be Closed to Climbers 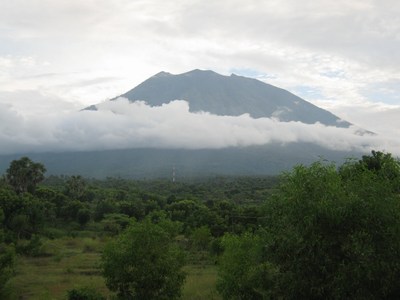 Numerous festivals and ceremonies abound on the island of Bali and two of these are the ceremonies of Ida Batara Turun Kabeh and Paneduh Jagat. It is because of these ceremonies that Bali’s sacred mountain, Gunung Agung, has been closed to climbers from March 14 – April 4, 2011. According to an article in the Bali Discovery newsletter, this step has been taken to guard the purity and sanctity of Bali’s highest and most sacred volcano.

These sacred ceremonies take place on March 19th. Good news for thrillseeking climbers is that the mountain will reopen on the 4th April. There are 2 established trekking routes to get to the summit. The first is from Pura Besakih, meaning a 2 hour drive from Kuta, and a long climb lasting several hours to get to the summit by dawn. This route gets you to the highest point on the crater rim. Guides are available at the base and charge anywhere from $50 for a group of 5 upwards.

From Pura Pasar Agung on the southern slope you can hike without a guide, but there are a few guys hanging out just in case. The climb is a straight shot up a 40 degree slope. No bends or switch backs. An average 2-3 people climb the volcano each day during periods in which the peak is open to visitors.

Climbing Gunung Agung is very hard on the knees. Don’t try this in the wet season (Nov-Mar). If you do climb Gunung Agung bring 4-5 liters of water per person and food. It is best if climbers do not bring pork or beef products on a climb of the mountain. This is to maintain the sanctity of Gunung Agung.