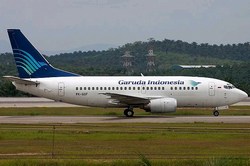 Would you buy shares in Garuda Indonesia in a public float of the company?. Currently, most certainly I would, provided the share options were right. The latest news is that the national airline intends to do just that but only a small proportion will be offered to the public. If you look at past history with airline company floats [or even businesses if it comes to that] more often than not the price of air tickets rise. At the moment Garuda Indonesia is a sound investment but I am not rushing to smash open my piggy bank with a hammer. Anyway, I think you will find that the public shares were be predominately offered to Indonesian citizens. Here’s more from Bali Discovery.

The Minister made his pronouncement at a signing ceremony of a memorandum of understanding between the Airline and Jasindo one of the Company’s insurers.

Pointing to the Rp. 250 billion (US$27.2 million) profit booked by Garuda in 2007, Minister Djalil is optimistic that the State-owned airline is now operating on a more viable business footing than in years past. Speaking at the same occasion, the CEO of Garuda, Emirsyah Satar, confirmed that the airline had earned a profit in the first quarter of 2008. The amount of the profit will, however, only be available in mid-May when the Company’s accountants make their formal financial report.

Meanwhile, the National News Agency Antara reports that Garuda will make an initial public offering (IPO) of shares in 2009. Satar said that intense efforts were underway to maximize the value of the Airline before launching the share offer. In addition to improving operational efficiencies across the board at Garuda, the Airline is continuing efforts to restructure its massive debt.