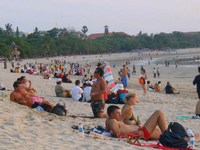 The foreign arrivals statistics for Indonesia are out courtesy of the Central Statistics Agency and they are showing a marked increase for the first quarter. Naturally, Bali remains the number one destination for travellers to Indonesia although arrivals from Europe are on the wane and this is probably due to the Indonesian Airlines ban imposed there. The quarterly statistics are great news for the country that is currently in their celebration year of Visit Indonesia, although I would liked to have seen more arrivals in the larger outlying islands like Sulawesi. It seems that most foreign tourists prefer the relative safety of Bali as compared to the larger Muslim dominated islands.

Here’s the article from the Jakarta Post with all the stats:

The statistics show Bali remained the county’s most popular destination for foreigners, with 446,886 visitors arriving in Ngurah Rai Airport, a 28.38 percent increase from the 363,686 received in the same period last year.

Manado, the capital of North Sulawesi, experienced the lowest number of foreign arrivals with 3,941, or contributing to only 0.28 percent of the country’s total arrivals.

The Ministry of Culture and Tourism recently launched the Visit Indonesia Year 2008 program, targeting seven million foreign arrivals and US$6.3 million in foreign exchange revenue for the year.

“The number of foreign arrivals in the first quarter was still far from the government’s target. However, the period is not the peak season for tourism. We expect a very high number of arrivals around July and August,” Rusman said.

He also said the average length of stay for foreign tourists decreased 0.06 percent to 2.69 days in February from 2.86 days in the previous month.

“The numbers of visitors from Singapore, Malaysia and Japan were the highest, while those from Bahrain, the United Arab Emirates and Egypt were the smallest,” Sasmito told The Jakarta Post.

BPS records show there were around 291,092 visitors from Singapore, 202,128 from Malaysia and 140,682 from Japan in the first quarter, while South Koreans, Australians, Chinese, Taiwanese, Britons, Americans and Indians made up the rest of the top-10 list of foreign visitors.

An air embargo imposed by the European Union on Indonesian air carriers is likely to have resulted in the decrease in visitors from EU countries.