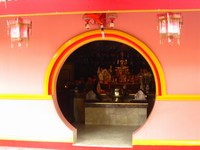 Bali is renowned worldwide for its beautiful Hindu temples and although the predominant religion is Hindu Dharma, there are other places of worship on the island that are for those of other religions such as the large Chinese community. The Indonesian word for a Chinese temple is klenteng and these you will find scattered around the island, some small and some that are of a more sacred level and importance. These are called viharas. If you go into Denpasar you will find a couple of the smaller klentengs but it is the ones further out across the island that are the most interesting to visit. I have always enjoyed trying to find as many of these temples as I can and over the decades I have come across quite a few. So, I decided to compile a few of my favourite Chinese temples that perhaps you would like to visit whenever you go into the countryside on road trips.

Ling Gwan Kiong (Singaraja): This fine temple is located just off Jalan Erlangga and a stones throw from the ocean. A colourful and beautifully constructed klenteng, access to the temple is via a water bridge over a pond filled with pink and white lotus flowers. An unusual array of Koi fish can be seen in the depths of the water of this quaint passover to the inner temple. Gold Bhudda statues and ornately decorated textiles were to be found everywhere. Particularly impressive are the murals of Deities hand-painted on the entrance doors and surrounding walls. I remember when I was there last I spoke to the guardian of the temple, an elderly Chinese man hard of hearing, and I found it difficult to obtain the information I needed regarding the klenteng and so I was unable to find the actual construction date of the place.

Brama Vihara Arama: Without a doubt the most stunning Chinese place of worship on the island of Bali is the monastery of Brama Vihara Arama. Located not far from Singaraja just east past Banjar you will find the Buddhist monastery. The Brahma Arama Vihara is a spectacular place and is the most important Buddhist monastery in Bali. Complete with golden Buddha statues and a pristine natural setting, the most stunning part of this monastery is the miniature replica of Borobudur Temple on the top level. There are actually several levels and each one serving a purpose as you ascend the steps. Novice monks come from all over the island and from other islands in the archipelago to study here.

Vihara Amurva Bhumi: As you cross over the Petanu River just before entering Blahbatuh, you can see the tops of the pagodas on the riverbank hillside. Just to the side of the road there is a small gravel section had been laid where you can park. Set into a large boulder and mostly covered by foliage is a plaque – Vihara Amurva Bhumi. A steep stairway hewn into the rockface leads down to a flat area above the Petanu River and underneath the bridge, and before you is the reasonably large Vihara.It was consecrated in 1988 and the number of devotees and estimated to be in the low hundreds. The Klenteng is adorned in the usual colours of red – signifying happiness, and, yellow – signifying wealth and prosperity. The Tungku just inside the red iron gates was adorned in a mass of colour. The Tungku is where devotees burn pieces of paper as offerings to the deities of the temple. Within the grounds of the Klenteng, dragons adorned supporting pillars, statues of animal deities were positioned in various places, and as guards to into the inner sanctuary where a gold Bhudda statue sits.

Vihara Dharmayana: When we returned to Bali after an absence of ten years having spent that time in Yogyakarta, both my wife and myself needed a place of worship being both Bhuddists. There are a couple of Klentengs (Chinese temples) in Denpasar but they are smaller whereas The Vihara is located on Jalan Tanjung Mekar is a relatively large temple and patronised by the Chinese community in Kuta. Anybody can enter the temple, look around and take photographs (please do it discreetly so as not to disturb those praying). There are several Bhuddist statues and the whole temple is decorated in the lucky Chinese colour of red. It is a delightful place to sit and take in the peace and quiet far removed from the busy streets of Kuta.

Ling Gwan Kiong (Tanjung Benoa): This is one place I found whilst exploring Tanjung Benoa. A beautifully constructed Chinese temple, Klenteng Darma Yasa is located to the east of the northern most point of the peninsula. At fist glance, it is striking in its bright red colour although you will find this to be the case when you visit most of the few Chinese temples on the island of Bali. Very little is known of the date of its construction, however, you will find it a great place to visit and wile away a few hours and I can imagine how spectacular it would be during the Chinese New Year celebrations. Three separate areas contain the Chinese deities. If you are unaware of how to pray to the deities then the resident monk is happy to guide in the procedure. After praying, you can burn some paper in the Tungku. This is done in asking for good luck from the deities.