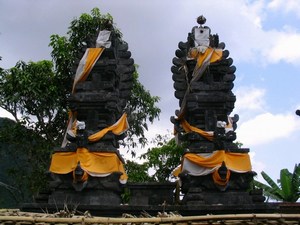 The temples of Bali are a significant part of Balinese culture and life. To visit a temple during a festive period is a magical experience for the traveller. There are temples, big and small, scattered all across the island but I have always found the mountain temples to be the most beautiful and fascinating. Although temple settings vary from one to another, they are intriguing in their structure and component.

To the Balinese, mountain temples are highly sacred and as a traveller visiting one of these magnificent structures you can well understand their significance. The mountainous areas of Bali are quite simply, beautiful and stunning. The cool air and freshness of the surrounding flora only enhance any visit to a mountain temple in Bali. It is always important to observe entry requirements and naturally, be respectful and discreet when taking photographs especially during a festive period.

Pura Besakih: The most important temple in Bali. Known as the Mother Temple, Besakih sits on the western slop of Gunung Agung, the most holy place for Balinese Hindus. The temple is actually a complex made up of twenty-two temples that sit on parallel ridges. It has stepped terraces and flights of stairs which ascend to a number of courtyards and brick gateways that lead up to the main spire Meru structure, which is called Pura Penataran Agung. All this is aligned along a single axis and designed to lead the spiritual upward and closer to the mountain which is considered sacred.

Besakih is not just one temple, but a large complex of temples extending up the mountain, over a distance of 3km. The official opening hours are daily 8am-5pm. In respect to the culture wear a sarong and sash, available outside from the many vendors. Besakih temple’s history dates back to megalithic times, with the most ancient section Pura Batu Madeg (temple of the Standing Stone) built around a central rock. 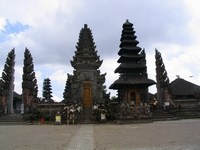 The temple is large in area and was originally located inside the crater. An eruption in 1924 forced the temple to be moved brick by brick and rebuilt on the crater rim. Along the northern edge is the multi-tiered meru and from here spectacular views are afforded of both Gunung Batur and Danau Batur. The temple is pre-Majapahit, meaning it was built before the arrival of the Majapahit Empire in Bali. In 1343 Bali was conquered by Gaja Mada who was the prime minister of the Majapahit Empire in East Java. Entrance to the temple is by donation and it is compulsory to wear a temple sash and sarong. 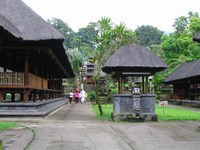 All shrines are here including the padmasana in the far right corner. The padmasana is the raised throne where the supreme deity, Sanghyang Widi Wasa, sits, his back towards the most sacred mountain, Gunung Agung. The padmasana is supported on the back of a cosmic turtle, the Bedawang, which carries the universe on its back.Temple layouts are slightly different, due to the unique sites that each occupy. Puru Luhur Batukaru has a section off to the right towards a watergarden. 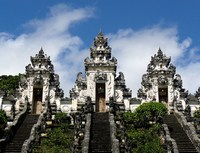 The temple is frequented by many pilgrims as this is a place where sacred holy water is obtained. Be warned though, to reach the temple you will have to scale 1,700 steps and is not recommended in the rainy season due to the steps being slippy and dangerous. However, once at the temple you will find it worth the effort.

Pura Ulun Danau Bratan: Located 2 hours north of Kuta on the shores of Lake Bratan. The temple is one of Bali’s kayangan jagat or directional temples and protects Bali from evil spirits but for the visiting tourist or traveller, it is a surreal and pleasant place.

The temple on the shore, Pura Teratai Bang has its own 7-tier meru dedicated to Brahma, the Creator. You will often see Balinese worshipers inside this temple, taking blessings and praying. Being such a sacred place, you are asked to stay outside the inner courtyard, but it is possible to look over the wall and get good photos.
There is also a traditional market place in the carpark selling the norm but, there is a plethora of fresh fruit on sale as well that is the best to buy whenever you visit this place.

The Balinese people rely on their rice harvest and the Goddess of water and fertility, Dewi Danu, who is the deity honoured here. The temple itself sits in well manicured gardens. The two obvious part of the temple are the structures set on land and the ones set on a point, extending into the lake. The temples grounds have an assortment of structures including the multi-tiered meru.