Ecotourism and Development in Bali 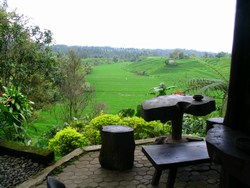 In a world where travellers are increasingly aware of the environment and the places they visit and the impact they will have upon that society, ecotourism is booming in most countries. Indonesia is no different. On the island of Bali there are a few tour groups that are geared towards ecotourism. Basically, ecotourism is ecologically sustainable tourism with a primary focus on experiencing natural areas that fosters environmental and cultural understanding, appreciation and conservation. This also might be in a volunteering capacity. Choosing to use local tour operators, buy from the locals so that the money goes back into the community and utilising local transport. There are others. But, on the island of Bali where responsible ecotourism is needed, the development is not progressing as much as it would be hoped.

According to Nature Conservancy, environmentally responsible travel to natural areas, in order to enjoy and appreciate nature (and accompanying cultural features, both past and present) that promote conservation, have a low visitor impact and provide for beneficially active socio-economic involvement of local peoples. This application might seem a bit hard in the fast pace of Bali with its high volume of tourists.

Here is a related article about the needed development in Bali:

Putu Sudana, an official at the Public Works Ministry’s Agency for the Conservation and Restoration of River and Coastal areas, said that about 20 percent of the province’s coastal areas were eroded, threatening infrastructures crucial to the livelihood of the Balinese and the economy of the region.

“”The situation is quite alarming. Residential areas, religious sites, public roads and tourism sites near beaches are currently at risk,”” said Sudana, who is in charge of conserving and protecting coastal areas on the island.

Putu explained that the pace of sea erosion varied in accordance to an area’s specific characteristic and condition. Sea erosion at the popular Kuta Beach, for instance, may be considered moderate at about a meter per year.

In some of areas, however, the rate of beach erosion can reach hundreds of meters annually.

“”In Lebih Beach in Gianyar regency the residents are losing about 200 meters of their farm land because of erosion,”” Putu added.

The office has already carried conservation programs to halt beach erosion by building cribs and revetments along the island’s coastal areas. With Rp 340 billion (around US$333 million), mostly financed by loans from the Japanese government and the State Budget, the agency launched special conservation programs to restore eroding beaches in Kuta, Sanur and Nusa Dua.

Putu, however, remarked that the efforts would be virtually of no consequence should the administration fail to control development policies that were harmful to the environment.

“”This is of course a dilemma. On one hand, we are expected to preserve the environment but on the other hand we need to boost the economy,”” he said.

Such illegal practices as digging sand from beaches for construction and the use of cyanide for fishing are still common in the island, destroying coral reefs and beaches, which are natural erosion shields.

“”And the effects of global warming have worsened the situation, as it increases the volume of sea water and bleaches the coral reefs,”” Putu said.

A researcher from Udayana University’s Environmental Research Center, I Wayan Sandi Adnyana, said Wednesday the government needed a holistic approach to cope with the problems of eroding beaches.

“”We handle it partially as nature is a unified entity,”” he said.
“”Building cribs in one coastal area may damage the area next to it as the crib will change the flow of the sea water.””

He concurred with Putu that a proper development policy was needed to halt beach erosion and to make nature friendly to human beings. Besides the problem of eroding beaches, Wayan said he found regulations on land conversion in the province’s capital Denpasar to be lagging.

“”We have seen that law enforcement regarding land conversion is very weak. If this continues, the city may see a higher potential for flooding disaster in the next few years,”” he said, warning that Denpasar could face regular floods.

The research center found that the number of green belts in the city had fallen from about 50 percent in 2000 to 40 percent today.

He urged the city administration to be more prudent in awarding construction permits to developers and investors.

The Public Works Ministry’s office in Bali has also found that four regencies, including Denpasar municipality, could face flooding problems due to sedimentation in several rivers.

Among the flood-prone rivers in Denpasar are Tukad Ayung, Tukad Ngenjung, Tukad Pungawa and Tukad Badung.

“”In the future, I’m afraid Denpasar will probably be like Jakarta,”” Wayan said. The green belts in the country’s capital, which faces regular flooding, account for less than 10 percent of its total area.

Just to finish off on this article, I particularly like the definition

from Nature Conservancy on Ecotourism:

Most tourism in natural areas today is not ecotourism and is not therefore, sustainable. Ecotourism can be distinguished from nature tourism by its emphasis on conservation, education, traveller responsibility and active community participation. Specifically, ecotourism possesses the following characteristics:

Sensitivity towards, and appreciation of, local cultures and biodiversity

Educational components for both the traveller and local communities