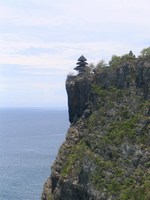 Like most people in Bali and travellers alike were disgusted with the development years back around Tanah Lot temple. There really is no need for this type of development that encroaches upon sacred ground and sacred places. It is unjustified greed. If any of you have recently visited Tanah Lot then you know what I mean. And now, developers have their eyes on the sacred temple of Pura Uluwatu. There are currently many development projects for new villas in the Bukit area in Jimbaran, including in the sacred area around Uluwatu shrine. This condition has triggered a public uproar with some of Bali’s noted intellectuals declaring the constructions illegal. But some locals and developers argue the constructions are legal because the developers acquired the necessary licenses from the Badung regent. There has to be a cut-off point as far as blatant development is concerned. It seems to me that this desecration of Bali will continue unless it is curbed and fast.

In a even worse case of desecration of a sacred site is that of what has occurred at the mother temple of Pura Besakih. It appears thieves have decided to steal sacred objects. I was appalled at this when I read it in the Jakarta Post this afternoon. Here’s the article for your persusal:

As many as eight burglary cases have taken place at various Denpasar temples recently. The burglaries have angered residents, who feel the crimes have desecrated the holy sites.

The thieves have made away with dozens of pretima (sacred effigies) worth hundreds of millions of rupiah. A pretima is a small statue of a mythological creature or a god constructed out of precious stones and gold.

“The economic value of a pretima is quite high, but its religious value is even higher,” scholar Ketut Sumarta said.

“A pretima might cost only Rp 10 million to construct, but the cost to sanctify it through a series of rituals could reach well above Rp 100 million,” Ketut said.

In the latest case, thieves made away with 24 pretima and other sacred objects from the Besakih temple in Tulang Ampian, North Denpasar, on Sunday night.

The residents discovered the burglary Monday afternoon and immediately notified the police.