Culinary Map to be Released 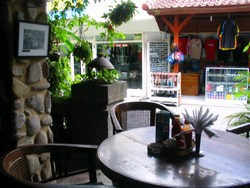 So often when my stomach reminds me that it is time to eat, I ponder for at least half an hour in making a decision on a destination for my choice of repast. Of course, in the main, I am never disappointed with my final choice. When I at home in Yogyakarta it is easy because I hit the street stalls of which there are many. But, in Bali one is spoilt for choice. Do I eat upmarket, warung or from the kaki lima. I was pleased to read today that a culinary map is due to be released and will be available at most places. This is an excellent idea for first-time visitors who are often bewildered by the island’s number of eateries and where to go. But, it’s not only the greenies that will benefit. Often people have said to me ‘Have you been to such-and-such a place. It’s near that other place’. Now all I have to do is look at a map!.

Here’s the article for you from the Jakarta Post:

A comprehensive culinary road map pointing out famous eateries in Bali’s tourist spots of Kuta, Denpasar, Sanur and Ubud is currently in the works.

The map is being prepared by the Bali Tourism Board, in cooperation with free culinary magazine ChefUs and Bali Village, an association of tourism promotion agencies.

Titled Warung Lipat (folded eateries), the map will feature a brief history of each restaurant as well as their location and popular menu items. About 40 such restaurants have been documented so far and the organizers are awaiting input from others.

The map’s publication is set to coincide with the school holidays which run from June to July.

“This map is designed especially for domestic tourists to explore our culinary spots for themselves,” tourism board chairman I Gusti Ngurah Wijaya said Wednesday.

The coordinator of the Warung Lipat production committee, Sri Dian Ekawaty, said the list of restaurants was drawn up by a team of independent food lovers made up of tourism board staffers and local journalists. The team spent months reviewing the food and interviewing the restaurants’ owners and customers.

“We also asked people who’d never visited the restaurants what their impressions were, just to get an idea of the place’s reputation. We’ve had to drop many restaurants from our list simply because their reputations weren’t very good,” she said.

Perry Markus of the Association of Bali Hotels and Restaurants said renowned chefs from the Bali chapter of the Indonesian Chefs Association’s would also be involved in checking the restaurants’ merits.

“We will ask these chefs to help increase the quality of the food served,” he said.

Komang Adi Arsana of the chefs’ association said a team of chefs had been tasked to regularly visit the restaurants and give advice on increasing food quality and maintaining cleanliness.will not only provide them with information but also some useful tips on topics such as how to preserve the food without losing the flavor so customers can savor it longer,” he said.

Besides providing information about popular restaurants, Wijaya said, it was hoped the map could positively contribute to the local economy because of its free advertising for restaurants.

“We’re not charging these local restaurant owners at all and that’s why it will be a free advertisement for them as well,” he said.

He said the tourism board planned to print about 100,000 maps to distribute at Ngurah Rai International Airport and in every hotel and shopping mall in the four tourist spots.

Ekawaty said up to Rp 195 million had been invested in the project with funding from the tourism board and several other tourism associations.