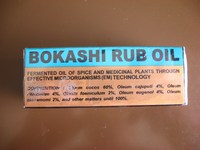 Quite a few years ago when I returned to Bali after having spent those previous years in other islands, I woke up one morning to find myself scratching the back of my legs like some maddened Banshee. At first I thought I had contracted some strange tropical disease and henceforth started to write my will. My wife rushed out and obtained some Calamine lotion upon my request and that did little to ease the itchiness or annoyance of the bright red welts that had appeared on the skin surface. Fortunately for me the Balinese lady who owns the homestay in Bali where I reside on my sojourns recognised my painful ailment. It was Bamboo Rash. As it turns out her husband suffered from the same malady on occasions and she promptly returned with Bokashi Oil. So, I applied liberal amounts of this magic oil onto the reddened welts whenever it became itchy and after a couple of days the rash had disappeared.

Bamboo rash is caused by minute bamboo mites that like to bury themselves into rattan cane furniture but you can also get it from bamboo growing naturally in the countryside. Brush past the bamboo and the mites drop onto your skin and ‘dig in’ much the same way as they do off rattan furniture. Bokashi Oil is easily obtained at an apotik and comes in two convenient, pocket-sizes. I suggest you buy the larger bottle as I found that Minyak Oles Bohkashi has a multitude of uses and especially for mosquito bites.