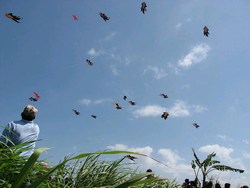 There are several main cultural events in Bali that draw the crowds. For instance, the Bali Arts Festival, the Writer’s Festival to mention a few, but it is the Bali Kite Festival that is appreciated by young and old, whether they be international tourists or domestic tourists. The annual international Kite Festival is held in July at Padang Galak area of Sanur Beach and attracts competitors worldwide. Actually, the event is a seasonal religious festival intended to send a message to the Hindu Gods to create abundant crops and harvests. These giant and colourful kites vary in size and shape. Some are four meters in width and almost 10 meters in length. Each type of traditional kite has its own competition, with heats of 10 teams vying for the best launch and longest flight. The area around Galak Beach is ideal in the dry season of June through August as the winds blow continually from east to west in most of Indonesia. A competition is also held for ‘New Creation’ kites which may include detailed three dimensional figures representing the Hindu Gods or sponsorship kites. Traditional and new creation kites are constructed from bamboo and cotton cloth. What is spectacular is the accompanying gamelan orchestra that plays music throughout the festival. Here’s more from the Bali Discovery.