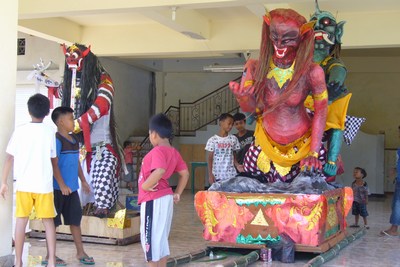 Whenever you travel to Bali [or the rest of the archipelago of Indonesia] it is useful to know prime dates of celebrations and public holidays. There are certain dates on the calendar when everything is closed; such as Nyepi.

There is always a festival of some kind happening in Bali every day. A majority are temple festivals but there are those special dates in the Balinese Calendar that are respected. Besides the Balinese festival days and public holidays, there are numerous celebratory days around Indonesia.

To help you with some of these dates and to give you an idea if these festival days are happening when you are in Bali, below is the list of public holidays in Indonesia and Bali for 2011. The ones’ I especially look forward to are Nyepi and for my wife Candika, being Chinese-Javanese, it has to be Chinese New Year.
Hindu Holidays 2011

These holidays are in addition to 13 National Holidays observed by all Indonesians.