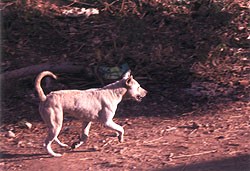 Most of us can well remember the heady days in the 80’s and 90’s when tourism in Bali was its peak. During that time we all noticed numerous, stray dogs virtually being masters of the footpaths and streets. They rummaged through offerings (canang sari), rubbish bins and on occasions were thrown scraps of food by tourists. Then, all of a sudden, these animals disappeared off the streets of Kuta and Legian with no real reason why. I had heard rumours that a lot of them were shot as were a lot if dogs in Indonesia after a child was bitten by a dog in Bandung, West Java, and copped a dose or Rabies and unfortunately died. Whatever the case for their disappearance, these dogs are slowly re-appearing on the streets and I like it. But who cares for these animals that are considered wretched. Fortunately there is an Australian woman, Linda Buller, who has taken up the mantel for these dogs.

I was reading an excellent article in the Jakarta Post today about the saviour of the dogs in Bali written by Trisha Sertori. Makes for excellent reading and it makes one proud that Linda is an Aussie doing a grand job. Here’s the article:

Linda Buller’s story in Bali, along with her empathy for the province’s most wretched inhabitants, goes back to her childhood in Australia; a childhood she says of abuse that set her, for a while, on the path to self destruction.

Buller, today an internationally recognized painter — and also known as Ubud’s “Lady of the Street Dogs” –, is up front about her former alcoholism; cracking self-effacing jokes about her misspent youth.

These days Buller wants “women to understand that when they are abused as children they can come out as great ‘thrivers’ — they can move out of the victim stage”.

“In Australia I was a victim. When I moved here in 1998 I had no money and had to become a thriver if I wanted to exist,” says Buller of her reformation as a human being.

Her journey from victim to, in her terms “thriver”, started back in 1985. From Buller’s accounts she was a rough and ready customer holding up several bars, but with the wisdom to invest in property.

“I sold my house at the time and had promised my girlfriend I would take her on a holiday. She wanted to come to Bali, which was not on my list at all,” says Buller of her unexpected foray into Asia.

“I had thought of Bali as commercial and built up. When I arrived my breath was taken away by the culture, the people, the landscape. I feel in love with the place,”

She had begun, unconsciously, writing her wish list. Buller, a fine arts graduate from the Bendigo Institute of Technology in Victoria, went on to study acupuncture and with these two skills and A$10,000 in the bank, took the leap of faith and moved to Indonesia.

In the act of building a new life for herself, Buller also wanted to build a new future for Bali’s fetid, mange-infected starving street dogs; those most wretched inhabitants scratching a living from the detritus of the Gods’ glorious island.

“My dream when I first came to Bali in 1985 and saw the dogs was to build a rehabilitation and adoption shelter. Today my dream has come true,” says Buller of the Bali Adoption Rehabilitation Center (BARC) dog shelter in Ubud that currently houses 86 dogs.

Gathering these dogs, often broken, battered and bleeding off the streets and rehabilitating them is no walk in the park. As Buller says, “I can bend down and pick up a dog with a gaping wound riddled with maggots and put it in my car and take it to the vet to get fixed up. Everyone else in the car walks home because they can’t stand the smell of the dog.”

One of her most beloved broken doggies is Kangaroo, found walking on her hind legs with a trail of desperate puppies in her wake.

“She had to walk on her hind legs like a kangaroo because she had been hit by a car or something and her stomach was open and infected. She was feeding her puppies on the street with this terrible wound. I brought them here and she is so loving,” says Buller of Kangaroo, who is not yet out of the woods, but now in good hands.

Pulling together the dog shelter has been a long and difficult journey, but like other journeys in Bullers life, taken on the chin.

“Some days have been very rough and I have wondered if I could keep going. But Kangaroo will walk over and put her paws on my knees and it is so obvious she is saying `you made a difference to me’ and that’s when I thought I can keep going,” says Buller of the early days of the refuge.

At the same time as Buller was attempting to establish the dog refuge she was also painting and exhibiting around the world. She had returned to painting after her successful acupuncture business, which had been the backbone of her early “thriving” in Bali, had like so many other businesses, collapsed with the first Bali bombing.

“Before the bomb I had got a tiny little shop in Jalan Hanoman and later moved to Jalan Gotama. I set up my acupuncture and herbalists and was doing very well. Then the bomb, and no money; I had to close. I was terribly depressed.

“A friend from Seminyak came to visit and saw my paintings. She wanted to hold an exhibition but I was too depressed to even think about it. She did it all and sold very well. Within two weeks my life had turned around,” says Buller of another dark period in her life.

She believes Bali, or Indonesia for that matter, chooses who stays and who goes; that any decision to live here is at the will of the Gods, not man.

“I think it was meant to be. In Bali the Gods will support you if you are supposed to be here. If not there’s no way anything will work.

“People end up in mental homes over their visas, get put in jail, whatever. Not that they are doing anything wrong, I believe it’s that they are just not meant to be here. For me, Bali is like an animal that breathes. It’s like I am an acceptable parasite.”

As a symbiotic element in the whorl of today’s Bali, Buller is doing well. She is living by her painting and the dog refuge has gathered followers and supporters around the world.

Buller’s art agent, however, suggests that she needs to decide whether she wants to be known as a painter or as the “Lady of the Dogs”. But Buller wants both — and to go fishing.

Here’s another related article about sterilising the dogs.